Below is news published on (29/01) on the 'Nextbigfuture' website, highlighting that SpaceX's Starlink competitor 'OneWeb' aims to launch the first 34 satellites in February 2020. 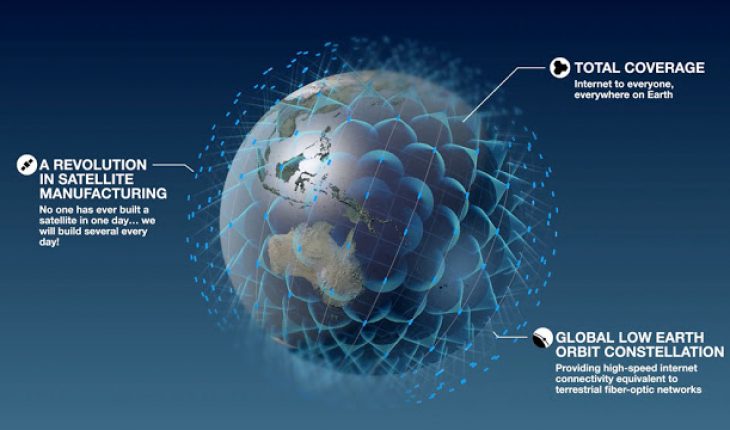 OneWeb plans a 600 satellite system with 48 spare satellites. OneWeb would need 18 successful Soyuz launches to deploy their satellites. The first launch was already delayed from November 2019. They have ordered 21 Soyuz launches from Arianespace. They hope to get all the satellites up by the end of 2021.

OneWeb is around one year behind SpaceX. SpaceX now has 180 production satellites in orbit. SpaceX is four successful launches from a minimum coverage system and ten from moderate coverage. SpaceX should have minimum coverage by April 2020 and moderate coverage by the middle of 2020. SpaceX should have full 1600 phase 1 coverage around the first quarter of 2021.
The satellites in the OneWeb constellation are approximately 150 kg (330 lb) in mass. The OneWeb satellites will be 18 polar orbit planes at 1,200 kilometers (750 mi) altitude.
The SpaceX Starlink satellites are in 500-550 kilometer orbits.

The satellites will operate in the Ku band, communicating in the microwave range of frequencies in the 12–18 GHz portion of the electromagnetic spectrum. The user terminal antenna on the ground will be a phased array antenna measuring approximately 36 by 16 centimeters (14.2 by 6.3 in) and will provide Internet access at 50 megabits/second downlink bandwidth.

Samsung and Amazon have no launches scheduled.
* Brian Wang

Brian Wang is a prolific business-oriented writer of emerging and disruptive technologies. He is known for insightful articles that combine business and technical analysis that catches the attention of the general public and is also useful for those in the industries. He is the sole author and writer of nextbigfuture.com, the top online science blog. He is also involved in angel investing and raising funds for breakthrough technology startup companies.

He gave the recent keynote presentation at Monte Jade event with a talk entitled the Future for You.  He gave an annual update on molecular nanotechnology at Singularity University on nanotechnology, gave a TEDX talk on energy, and advises USC ASTE 527 (advanced space projects program). He has been interviewed for radio, professional organizations. podcasts and corporate events. He was recently interviewed by the radio program Steel on Steel on satellites and high altitude balloons that will track all movement in many parts of the USA.
He fundraises for various high impact technology companies and has worked in computer technology, insurance, healthcare and with corporate finance.