Phenomena that happen in space environment can interfere with systems of power distribution, national defense, aircrafts, communication or navigation by satellites, among others. On Thursday (20/10) , in São José dos Campos (SP), Brazil, the National Institute for Space Research (Instituto Nacional de Pesquisas Espaciais – INPE) promotes a workshop with users from its Program for Studying and Monitoring Brazilian Space Weather (Programa de Estudo e Monitoramento Brasileiro do Clima Espacial - EMBRACE), which studies Sun's behavior and its effects on Earth.
The workshop is an opportunity to hear different opinions and know about technology needs in several areas. "The meeting with users may help to orientate our activities and our long-term plans," said Clezio De Nardin, a researcher from EMBRACE/INPE and president of the event's organizing committee.
Companies and institutions such as Embraer, Azul Linhas Aéreas, Petrobrás, Department of Airspace Control of Brazil, Eletrobrás, Furnas, Inmetro, Unesp and USP, among others, are participating.
The complete program of the "Space Weather Program Workshop with Users" is at www.inpe.br/climaespacial/workshop2011usuarios
EMBRACE
The Program of Space Weather Study and Monitoring of Brazil (EMBRACE) evaluates solar phenomena that affect the environment between Sun and Earth, and the space around Earth.
Solar phenomena can interfere with systems like GPS and may induce electric currents in transformers of power transmission lines and affect the protection of pipelines for oil and gas transporting. These phenomena are particularly intense in the space environment of Brazil, due to large size of the country, situated over the north and south of geomagnetic equator, to the maximum geomagnetic declination and to the South Atlantic Magnetic Anomaly.
The EMBRACE offers real-time information on the Internet, and makes predictions about the Sun-Earth system to diagnoses their effects on different technological systems in areas such as satellite navigation and positioning systems (aircraft, ships, oil platforms, precision agriculture), communication (geostationary satellites, aircraft), power distribution (power lines, pipelines for distribution of natural gas and oil), and national defense systems.
Through studies about electrodynamic processes of the equatorial ionosphere and low latitudes, INPE's researchers monitor physical parameters such as characteristics of the Sun, interplanetary space, magnetosphere, ionosphere and the mesosphere. 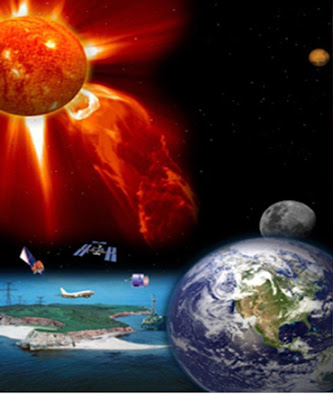 More information is available at www.inpe.br/climaespacial
Source: WebSite of the National Institute for Space Research (INPE)
Foreign news–English and Spanish