It follows one communicates published on the day (01/13) in the website of the National Institute for Space Research (INPE) nothing that the Ciosfera 1 Module was inaugurated in Antarctica.

Brazilian Scientists inaugurated the first national module (Criosfera 1) in Antarctica interior, during an opening ceremony that took place on Thursday (12/01) in a camp based at 84° S. After almost a month on the frozen continent – the team arrived in Antarctica on Dec.17, 2011 –, facing thermal sensations up to -42°C, the installation of inside and outside module equipment was successfully completed.

It is the first Brazilian scientific module into the Antarctic continent, because the country has only one base in the region. All Criosfera 1 infrastructure was developed, integrated and tested at INPE.

The Module measures 6.30 m in length, 2.60 m wide and 2.5m in height, totalizing a weight of 3500 kg. It is 1.5 m above the ground to avoid snow accumulation and to allow the passage of wind. By sending daily weather data by satellite, the intention is to get a review of the South America’s pollutants impacts in other parts of Antarctica.

The team consists of ten scientists who are near the module in the region (84°S, 79°29'39"W), and other seven people who stayed at the Union Glacier camp (79 ° 46'S , 82 ° 50'W). Researches and technicians from INPE, also from Federal University of Rio Grande do Sul (UFRGS) and the University of Rio de Janeiro State (UERJ) are participating.

Among the main scientific activities are: the ice drilling, in order to get testimonies that could reveal the history of the planet’s atmospheric composition (ice cores containing about 7 cm in diameter and 80 cm in length); the assembly and activation of Criosfera 1 module, which will send weather information throughout the year; and the surveying of ice morphology and dynamics in Union Glacier, also how they respond to environmental variations.

Experts have delayed their return from the camp, which will probably be between Jan. 19-22, due to bad weather and work schedule. They might arrive to Punta Arenas, Chile, about Jan.24.

A milestone for the Brazilian Antarctic Program, the module opening shows the pioneering of Brazil’s researches institutes. Criosfera 1 will be the first one of its kind installed in the Antarctic interior to work 24 hours a day, without needing technicians monitoring its operations. Criosfera 1 is sustainable because does not use fossil fuel for its operation due to solar panels and wind generators.

Brazilian scientists will leave automatic equipments in the module for weather monitoring, carbon dioxide measurement and atmospheric particulates sampling, which will continue operating throughout 2012, and its operation, as well as energy systems, will be controlled by satellite communication.

The results obtained in the stand-alone module will be added to the research conducted at the Brazilian Antarctic Station Comandante Ferraz, based at latitude 62° S, on the continent edge. Along with other institutions in Brazil, INPE has been conducting research in the region for over 25 years. Their studies aim to know more about the atmosphere dynamics, the ozone layer, weather, global warming, greenhouse gases, ultraviolet radiation, the sun-atmosphere relation, the transport of pollution, oceanography and ocean-atmosphere interaction. 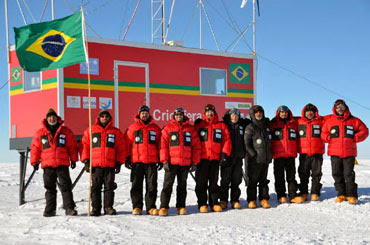 Team at the module inauguration, on Thursday (12/01)