It follows one communicates published on the day (01/10), in the site "www.space-travel.com", announcing that Fifty-Seven Student Rocket Teams to take NASA Launch Challenge. 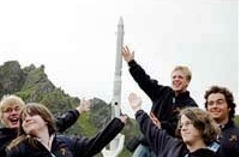 More than 500 students from middle schools, high schools, colleges and universities in 29 states will show their rocketeering prowess in the 2011-12 NASA Student Launch Projects flight challenge. The teams will build and test large-scale rockets of their own design in April 2012.

NASA created the twin Student Launch Projects to spark students' imaginations, challenge their problem-solving skills and give them real-world experience. The project aims to complement the science, mathematics and engineering lessons they study in the classroom.

A record 57 teams of engineering, math and science students will take part in the annual challenge, organized by NASA's Marshall Space Flight Center in Huntsville, Ala. Fifteen middle and high school teams will tackle the non-competitive Student Launch Initiative, while 42 college and university teams will compete in the University Student Launch Initiative. The latter features a $5,000 first-place award provided by ATK Aerospace Systems of Salt Lake City, Utah.

"This competition is extremely important to ATK to mentor and train our future workforce," said Charlie Precourt, ATK general manager and vice president of Space Launch Systems. Precourt is a former space shuttle astronaut who piloted STS-71 in 1995 and commanded STS-84 in 1997 and STS-91 in 1998.

"ATK is proud to enter our fifth year as a partner with NASA on this initiative to engage the next generation. The competition grows in impact each year."

Each Student Launch Projects team will build a powerful rocket, complete with a working science or engineering payload, which the team must design, install and activate during the rocket launch. The flight goal is to come as close as possible to an altitude of 1 mile, requiring a precise balance of aerodynamics, mass and propulsive power.

As in classroom studies, participants must "show their work," writing detailed preliminary and post-launch reports and maintaining a public website for their rocket-building adventure. Each team also must develop educational engagement projects for schools and youth organizations in its community, inspiring the imaginations and career passions of future explorers.

In April, the teams will converge at Marshall, where NASA engineers will put the students' creations through the same kind of rigorous reviews and safety inspections applied to the nation's space launch vehicles.

On April 21, 2012, students will firing their rockets toward the elusive 1-mile goal, operating onboard payloads and waiting for chutes to open, signaling a safe return to Earth.

The student teams will vie for a variety of awards for engineering skill and ingenuity, team spirit and vehicle design. These include two new prizes: a pair of TDS2000 Series oscilloscopes, which are sophisticated tools for studying the change in flow of electrical voltage or current.

Donated by Tektronix Inc. of Beaverton, Ore., the oscilloscopes will be presented to the two school teams that earn the "Best Payload" and "Best Science Mission Directorate Challenge Payload" honors.