Satellite images and meteorological observations will be used to monitor crops and predict food market trends. A considerable part of the increasing world population is living in countries that face the greatest problems with food insecurity. The solution of issues such as price volatility, access to food and sustainable increase in productivity implies better information about the agricultural activity.
Brazil, through its National Institute for Space Research (Instituto Nacional de Pesquisas Espaciais - INPE), member of the Group on Earth Observations (GEO), an intergovernmental organization responsible for part of the action plan recently launched by G20, which brings together the world's largest economies. The idea is to monitor soybeans, corn, wheat and rice crops - agricultural commodities of high consumption and impact on the global market.
Agricultural engineer and PhD in Physics of Remote Sensing, João Vianei Soares has been an INPE's researcher for more than two decades and has been living for a year in Geneva, Switzerland, as a consultant for the GEO secretariat for agriculture. His mission is to coordinate initiatives aimed at monitoring the production, and discussing with countries offering free data that can contribute to building a global system. Former general coordinator of INPE's Earth Observation, he is now ahead of actions that led to approval of the GEO GLAM initiative (Global Agriculture Monitoring) in collaboration with representatives of the France’s Ministry of Agriculture, which chaired the G20 last year.
“The global agriculture monitoring by GEO takes part in G20 plan aimed at agriculture and food price volatility. The goal is to improve the information on grain production over the world, making it clearer, to guide government decisions about their agricultural policies and to avoid speculation on stock and price volatility,” explained Soares. The projection of crops depends on the weather and climate information, and satellite monitoring, combined with other economic and social indicators. Some countries have their own systems, while others, even having the required information, do not have an effective program to monitor the production. The United States, China and European Union already have systems that monitor agriculture worldwide. The FAO, UN agency for agriculture, has a system aimed at vulnerable countries.
“Countries like Brazil, which are major producers and exporters, will take a huge advantage of the transparency of a system that is able to integrate the most important crop estimating programs in the world. Others have been monitoring our production for a long time, it means that it is already ‘transparent’ for some countries,” said the GEO consultant for agriculture, who highlighted the Brazilian experience in satellite monitoring of land use and the national meteorology. “Our capacity of satellite data application is recognized around world, but we can do more for agriculture, helping sectors that have the duty to make agricultural statistics and manage supply policies.”
Geo will work to improve the international community’s ability to produce and disseminate relevant information for monitoring of agriculture production at national, regional and global levels. It also will guide Space Agencies strategies to invest in remote sensing technologies and to improve agriculture monitoring.
The launch of CBERS-3 in 2012, as well as new instruments from Europe, Japan, India and the United States, is fundamental to Global Agricultural Monitoring System’s succeeding.
The information might be open, as satellite images from INPE, which was the first institution in the world to share observation data via Internet.
The GEO initiative, which brings together 90 countries and 60 organizations, and the G20’s decision to adopt a global monitoring system, must result in a plan to implement actions and set goals, deadlines and assignments. There will also be a plan to collect specific data that will be submitted to space agencies. Since then, seven million dollars a year might be spent, with contributions of G20 and other institutions like World Bank.
"The additional investment will be focused on capacity development (training and infrastructure) of countries that need it and is very small comparing to the benefit, because the initiative builds on existing resources coming from 'in-kind' contributions in satellites, teams and programs already in operation. Food security and price volatility of agricultural commodities will always be a priority in a world that needs to double its agricultural output over the next 40 years to provide food for nine billion people. These are expensive issues for everyone; we just have to remember the recent crisis resulting in the end of several governments in the Middle East and North Africa has its origin in the lack and high food prices," concluded Soares.
About GEO www.earthobservations.org 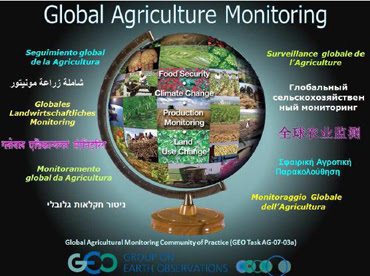