It follows one communicates published on the day (12/19) in the website of the National Institute for Space Research (INPE) noting that the institute is holding a scientific campaign to improve sensors that will be aboard the next generation of geostationary satellites.

The Brazil’s National Institute for Space Research (Instituto Nacional de Pesquisas Espaciais - INPE) is holding a scientific campaign to improve sensors that will be aboard the next generation of geostationary satellites called GOES-R. Such satellite will have, beside other components, a sensor for lightning detection, the GLM (Geostationary Lightning Mapper), which will allow the severe weather monitoring.  The GOES-R will be launched by the National Oceanic and Atmospheric Administration of the United States (NOAA), in 2015.

Steven Goodman, lead scientist of the NOAA second generation of meteorological satellites program is at São José dos Campos this week to accompany the CHUVA-GLM Vale do Paraíba campaign.

“Lightning Mapper” tests happen among the CHUVA Project activities, carried out by INPE in partnership with other institutions, which uses next-generation radar to collect data and monitor the precipitation between the north coast of São Paulo state and Vale do Paraíba. In addition to the weather radar, four networks for detection of lightning were installed for the experiment, which are able to record lightning occurrence in 2D and 3D within a radius of 250 and 150 km from São Paulo city.

The three-dimensional measurements of electrical discharges made during the campaign will guide the development of algorithms for weather forecasting in a short term (the so-called nowcasting) and precipitation estimation that will be generated from data of the next generation of geostationary satellites. The GOES-R will be the first geostationary satellite to have a lightning sensor on board.

Rachel Albrecht, a researcher for the Weather Forecasting and Climate Studies Center (CPTEC) in the National Institute for Space Research (INPE) is one of the people responsible for the development of algorithms that use multiple sensors (GLM and ABI) to estimate the amount of rain and to detect and monitor severe weather.

The data collected by lightning detection networks installed for the CHUVA Project, and the other seven operational networks (including the RINDAT - National Integrated Network for Lightning Detection, whose INPE is associated) will be compared to SEVIRI sensor (Spinning Enhanced Visible and Infrared Imager) currently aboard the Meteosat, a European geostationary satellite covering South America used to estimate rainfall in the short term. A similar sensor called ABI (Advanced Baseline Imager) will also be on board the GOES-R, whose data in combination with the GLM should improve lightning monitoring.

In addition to bringing a better understanding of physical processes related to lightning and storm clouds, the campaign will improve the record of discharges of convective clouds – which top of the cloud is cold - through satellite images, which can also monitor severe storms (winds, hail, tornadoes, etc.), and predict severe events from electrical activity of the cloud.

The CHUVA Project has installed the operational heart of the SOS Vale do Paraíba at the Technological Park in São José dos Campos, which is a monitoring system that provides severe weather forecasts with resolution up to one kilometer and able to predict rain two hours in advance.

A geographic information system linked to the radar and other equipment of the project will simulate the rain impacts through neighborhoods and streets, according to rainfall. Civil Defense units in the region and the Center for Monitoring and Natural Disasters Warning (Cemaden), of the Brazil’s Ministry of Science, Technology and Innovation (MCTI) can monitor and use the products of the SOS Vale do Paraíba. 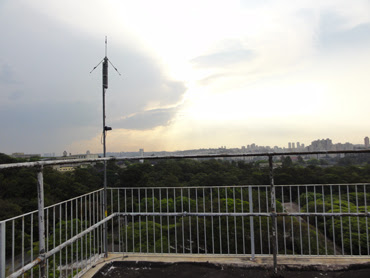 LMA sensor installed at the Institute of Physics, University of São Paulo 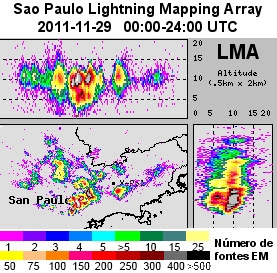 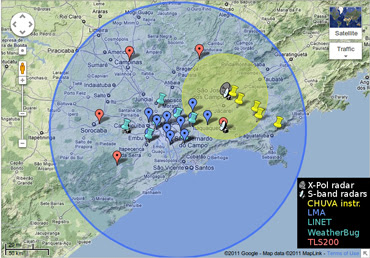 Instrumentation of the Chuva Project-GLM Vale do Paraíba