dezembro 07, 2011
Hello reader!
It follows one communicates published on the day (12/01) in the website of the National Institute for Space Research (INPE) noting that the “Criosfera 1” (first Brazilian standalone module for atmospheric data collection) goes to Antarctica.
Duda Falcão
Criosfera 1 Goes to Antarctica
Thursday, December 01, 2011

The Criosfera 1, first Brazilian standalone module for atmospheric data collection, which had been prepared at the National Institute for Space Research (Instituto Nacional de Pesquisas Espaciais – INPE), is on its way to Antarctic interior.
After the preparation at INPE, from August 27 to October 24, Criosfera 1 module went by truck to Punta Arenas, Chile. On Monday (11/29), it was loaded into an airplane going to Union Glacier, in the base of Ellsworth Mountains, located at 80ºS e 82ºW. “Then it will be transported by sled pulled by tractor until its destination on the ice sheet of West Antarctica,” said Marcelo Sampaio, INPE’s engineer and technical coordinator of Criosfera 1 Project.
Responsible for coordinating the preparation, installation and after, the access and quality of data generated in the module and sent to Brazil, Sampaio also will go to Antarctica, as well as the technician Heber Reis Passos.
From Dec. 21 to Jan. 13, experts from INPE, State University of Rio de Janeiro and Federal University of Rio Grande do Sul (UERJ and UFRGS) will live in Criosfera 1 to complete its installation. “Along with the module and associated equipment, all the material of our camp is already shipped,” said INPE’s experts responsible by the scientific instrumentation and energy supply infrastructure of the module, which has a lot of solar panels and wind generators.
It is a pioneering achievement of Brazil’s institutions and a landmark for the Brazilian Antarctic Program. When we return from the expedition, automatic equipment of weather monitoring, measurement of carbon dioxide, also sampling of atmospheric particulates will remain operating throughout 2012. All these equipment and energy systems will be monitored by satellite communication,” concluded Sampaio.
Funded by CNPq (Brazilian Antarctic Program - Programa Antártico Brasileiro - PROANTAR), Criosfera 1 will be the first one of its kind installed in the Antarctic interior to work 24 hours a day, without needing technicians monitoring its operations.
Along with INPE, UFRGS and UERJ, the UFF (Fluminense Federal University), FURG (Federal University of Rio Grande), UFV (Federal University of Viçosa), ON (National Observatory), and INACh (Chilean Antarctic Institute) are also involved in the Criosfera 1 Project.
The results obtained by the module will be added to the research conducted at the Brazilian Antarctic Station Comandante Ferraz, based at latitude 62°S, on the edge of the continent. Along with other institutions in Brazil, INPE has been conducting research in the region for over 25 years. Their studies aim to know more about the atmosphere dynamics, the ozone layer, weather, global warming, greenhouse gases, ultraviolet radiation, the sun-atmosphere relation, the transport of pollution, oceanography and ocean-atmosphere interaction. 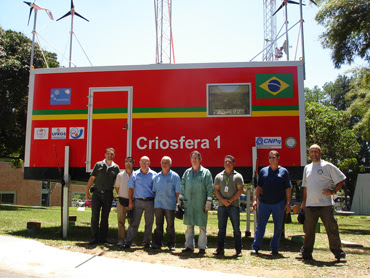 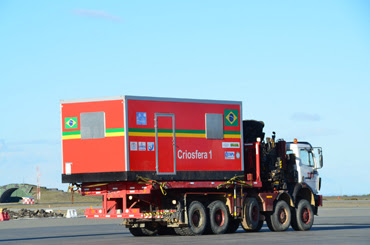 Module being moved from Punta Arenas (Chile) to the airport 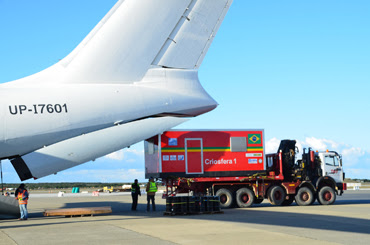