It follows a note published on the day (11/19) in the website “Parabolic Arc” noting that U.S. Army and NASA are working on Low-Cost Nanosat Launcher. 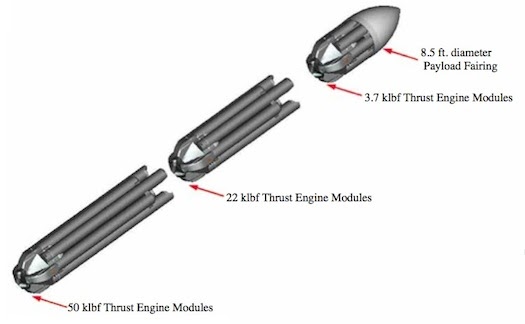 The U.S. Army is leading an effort to develop a dedicated launcher that would be capable of launching nano-satellites into precise orbits from almost any location at an ultra-low cost.

The program is called SWORDS, which stands for Soldier-Warfighter Operationally Responsive Deployer for Space. And NASA is a partner in the program, which expects to see an orbital test flight take place in the summer of 2013.

A summary of SWORDS drawn from a U.S. Army handout is below:

The SWORDS launcher is a cooperative project between Office of the Secretary of Defense, U.S. Army Space and Missile Defense Command/Army Forces Strategic Command and NASA. The transition manager for the Joint Capability Technology Demonstration is the U.S. Army’s Program Executive Office for Missiles and Space. The demonstration will consist of ground engine testing, a suborbital flight test and an orbital flight test in the summer of 2014. A dedicated nanosatellite launcher will extend the miniature electronics revolution into space by enabling combatant commands to have a launch-on-demand capability. 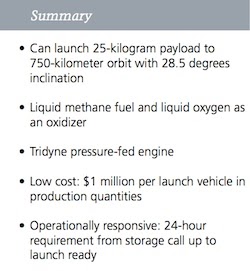 SWORDS will place nanosatellites into precise low earth orbits to provide capabilities both where and when they are needed. Nanosatellites will no longer have to wait months or years for piggyback rides subject to the schedule and or- bital locations of other payloads. SWORDS will allow the affordable maintenance of constellations of nanosatellites in low earth orbit to provide communications and other services at an unprecedented low level of mission com- mand, regardless of where American forces are deployed. The SWORDS launch vehicle can be transported by C-130 aircraft, and is designed to launch out of multiple ranges, including austere ranges with as little infrastructure as a simple concrete pad.

The focus of the SWORDS dedicated nanosatellite launch vehicle is on low cost rather than high performance. Ultra low cost is achieved by careful selection and judicious application of commercial-grade materials and components, as opposed to traditional aerospace-grade components. SWORDS uses a pressure-fed propellant system, eliminating the need for a turbopump. Thrust magnitude steering is used vice engine gimbals. Commercial-off-the-shelf electronic components are used for avionics. Safe, widely available, and inexpensive fuel and oxidizer is used. Range costs are minimized using a “ship and shoot” concept that inherently reduces the amount of time spent on the range. The innovation of SWORDS is in the systems engineering and integration of current technologies to achieve low cost, low part count and high operational readiness.