It follows a note published on the day (10/09) in the website of the National Institute for Space Research (INPE) informing that INPE testing Amazônia-1 Structural Model.

An important step to qualify the structural model of Amazônia-1 satellite was successfully completed by the National Institute for Space Research (Instituto Nacional de Pesquisas Espaciais - INPE). At the Integration and Testing Laboratory (LIT) of the institute, in São José dos Campos (SP), the model faced, since September 20, a lot of vibration tests to make sure if its structure were able to withstand the impacts of launch and in-orbit maneuvers.

From now on the activities for the acoustic test may start. Shortly after, the preparation for thermal testing at LIT/INPE will begin, another essential step to qualify the satellite.

The Amazônia-1 is the first satellite assembled having the Multimission Platform (PMM) as a service module, which is a modern concept in terms of satellite architecture created by INPE. In this platform there are all devices that perform functions needed for a satellite survival and operation.

The PMM can be reproduced to meet different types of space missions. The reuse of this platform project reduces costs in the manufacturing of new satellites and also the time of their development. Therefore, the Amazônia-1 structural model qualification also benefits the next satellite projects that will be assembled from the PMM. 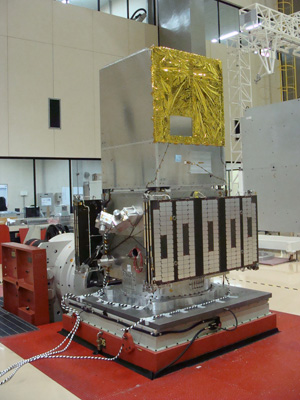 Structural model of Amazônia-1
during vibration testing at LIT/INP