Innovative Astronomical Camera Will Be Developed at INPE

It follows a note published on the day (10/10) in the website of the National Institute for Space Research (INPE) informing that a innovative Astronomical Camera will be developed at INPE.

Innovative Astronomical Camera
Will Be Developed at INPE

The SPARC4 (Simultaneous Polarimeter and Rapid Camera in Four Bands), an innovative tool for astronomical studies, will be developed by the National Institute for Space Research (Instituto Nacional de Pesquisas Espaciais - INPE) in collaboration with Brazilian scientific bodies. It is a camera that will enable performing photometry and polarimetry with moderate time resolution and in four spectral bands simultaneously.

In astronomy, when referring to optical cameras, images would be obtained in a single range of wavelength (of light). For obtaining images in four colors simultaneously and measuring the polarization of light, o SPARC4 will be unique in the world.

The conceptual project of the new instrument was approved by a committee of experts from INPE and from the National Laboratory for Astrophysics (Laboratório Nacional de Astrofísica - LNA), outside the SPARC4 technique team. The instrument must be ready within 2 to 3 years and will be installed on the 1.60m telescope at Pico dos Dias Observatory, headed by LNA in Itajubá (MG).

"The scientific data on astronomy are basically information about the light emitted by the objects of interest, such as stars and galaxies. The data is collected by instruments attached to telescopes. They are, therefore, light 'meters'. These instruments may be of several types: those that measure flow, the spectrum measuring (flux as a function of wavelength), those which obtain images, which measure polarization, among others. The SPARC4 is two-dimensional and can obtain images; with it we will measure not only the flow but also the polarization," explains Claudia Vilega Rodrigues, a researcher at the Astrophysics Division of INPE.

The conceptual project of SPARC4 is funded by the Foundation for Research Support of the São Paulo State (FAPESP).

In São José dos Campos (SP), are performed observational and theoretical research in diverse areas of astrophysics, with emphasis on instrumental development. Instrumental projects of Astrophysics Division (DAS/INPE) cover different bands of the electromagnetic spectrum, such as radio waves, infrared and optical radiation, X-rays and gamma, as well as gravitational wave detectors. Among its major projects under development include an X-ray imager, the Mirax, and the Brazilian Decimetric Array (BDA) for investigations of solar and cosmic phenomena.

INPE has the Brazil’s largest radio telescope in operation, landed in Atibaia (SP), and also contributes to the development of instrumentation for large telescopes such as SOAR (Southern Astrophysical Research), in Chile, whose mirror has more than 4 meters in diameter.

In collaboration with other Brazilian and foreign institutions, INPE researches and participates in the development of instruments for Cosmic Microwave Background (CMB) studies, to better understand the mechanisms responsible for the galaxies formation and other structures in the Universe. Moreover, INPE has graduate courses continually forming researchers in Astrophysics and extension courses for teachers and undergraduate students, with the aim of contributing to the popularization of astronomy in Brazilian society. 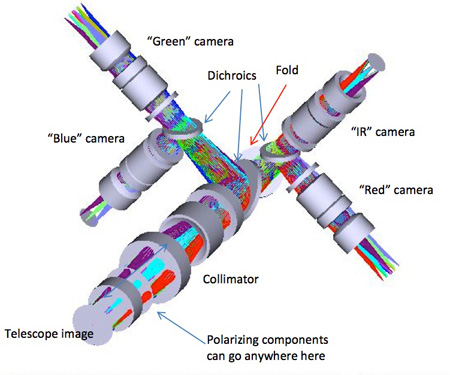