Gov’t Boosts Its Goals for Space

It follows one communicates published today (11/27), in the south Korean website "Korea Joongang Daily", highlighting that the South Korean Government is increasing its goals for space.

Gov’t Boosts Its Goals for Space 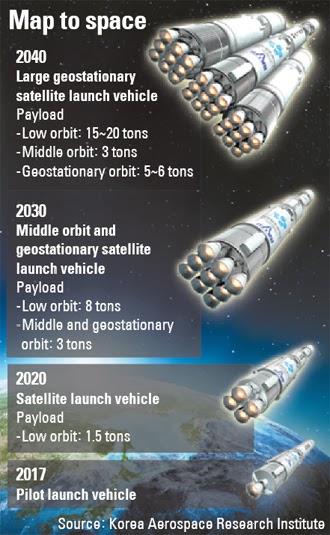 Korea plans to launch an exploratory lunar probe aboard its own launch vehicle by June 2020 and later embark on missions to Mars and asteroids by 2040, the Ministry of Science, ICT and Future Planning announced yesterday.

This represents a revision of the space development blueprint that moves up the time frame of the lunar landing mission and outlines a budget and other long-term space plans.

The advancement of Korea’s space program is one of President Park Geun-hye’s key pledges in line with other projects aimed at fostering the sciences and engineering fields.

Initially, the development of the space launch vehicle, or rocket, was scheduled for September 2021 with a budget of 1.545 trillion won ($1.45 billion). The ministry pushed up the schedule by one year and three months, and boosted the budget to 1.957 trillion won.

What distinguishes the new rocket from its predecessors is its entirely indigenous technology.

“The Naro partly used Russian technology in its first stage but the upcoming launch vehicle will be solely dependent on domestic technology,” Lee Byung-soo, an official of the Science Ministry, told the Korea JoongAng Daily.

Naro-1 is Korea’s first carrier rocket and it successfully placed a satellite called STSAT-2C into low Earth orbit on its third attempt in January. The first two attempts failed.

The new launch vehicle will be designed to carry an unmanned lunar rover and other exploratory probes and satellites, according to the ministry.

“If we succeed in the lunar mission, Korea can be considered as one of the leading nations in space programs and the success will instill a sense of pride to the public,” said Lee Sang-mok, deputy minister of the Science Ministry.

The ministry also expects the new space initiative to create more jobs. It predicted the number of space-related jobs will increase to 4,500 by 2017 from the current 856.

Despite the optimism of the government, some analysts worried that the plan was too ambitious. In order to accomplish a moon landing mission, Korea should succeed in developing both a lunar probe and the launch vehicle.

“If we think about a testing period and follow-up checks after the trial, the government’s proposal is almost impossible,” said Jang Young-geun, an aerospace engineering professor at Korea Aerospace University.

Others said that the plan is viable.

“If we develop a lunar probe and launch vehicle in a two-track system, we can meet the time frame,” said Tak Min-je, an aerospace engineering professor at Kaist and outside advisor of the state-run space project.

China managed to launch a man into space on its own rocket in 2003 and put its first lunar probe into orbit in November 2011.