INPE Publishes Maps of Drought in the Southern Brazil

It follows one communicates published on the day (02/02) in the website of the National Institute for Space Research (INPE) noting that the INPE publishes maps of drought in the Southern Brazil.

INPE Publishes Maps of
Drought in the Southern Brazil

INPE has carried out the mapping in partnership with the Federal University of Santa Maria (UFSM) through the Laboratory for Drought in Southern Brazil (LESul), maintained by both institutions to analyze the dynamics of vegetation in Paraná, Santa Catarina and Rio Grande do Sul states, among other researches and activities.

The survey of most affected cities in the Southern Brazil between November and January, as well as the maps, is available for download at http://www.inpe.br/crs/geodesastres/desastres5.php.

All information has been sent to the Civil Defense of the three states. On the maps, the state of vegetation is classified into seven levels ranging from extremely dry to extremely green.

"We see a huge difference in the maps between the spring and summer, revealing how the drought has worsened since September," said researcher Tania Maria Sausen, head of the Geodesastres-Sul Center of INPE.

The data show that, both in spring and summer, Rio Grande do Sul was the most affected state, because had 58.7% of its area affected by drought. Paraná is the next state, which had 54.3% of its territory under the effects of drought before the rain season. Check here the area of drought in the Southern Brazil. 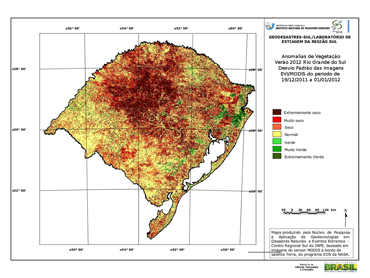