It follows one communicates published on the day (02/08) in the website of the National Institute for Space Research (INPE) noting that the “First Brazilian Satellite” completes 19 years in orbit.

After reaching 19 years in space, on February 9, SCD-1 will have completed 100274 orbits around the Earth and traveled about 4.5 billion kilometers, which corresponds to 5910 round trips to the moon. The SCD-1 is the first satellite developed by the National Institute for Space Research (Instituto Nacional de Pesquisas Espaciais – INPE) and it is still operating and relaying information to the weather forecasting and watersheds monitoring, among other applications.

The launch of SCD-1 by U.S. Pegasus Rocket in 1993 was the beginning of the operation of the Brazilian System of Data Collection, now called National Environmental Data System (SINDA). The system is based on low-orbiting satellites that relay to a mission center all the information received from a large number of data collection platforms (PCDs) throughout Brazil.

This system provides data for Brazil’s governmental and private institutions that develop research and applications in different areas, such as weather and climate forecasting, study of the atmospheric chemistry, pollution control and assessment of renewable energy potential.

The satellite picks up PCDs signals over the country and sends them to the reception and processing station at INPE in Cuiabá (MT), Brazil. Then, data is transmitted to INPE Nordeste, the regional center of the institute located in Natal (RN), Northeastern Brazil, where it is processed and distributed to users through the address http://sinda.crn2.inpe.br. Currently, the system is made up by SCD-1 and SCD-2 satellites, the last one launched in 1998. 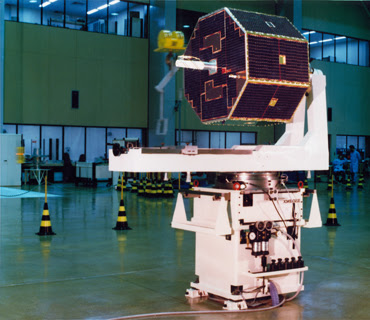 SCD-1 in the Integration and Testing Laboratory of INPE