DLR Changes Date and Place of the Mission Shefex II 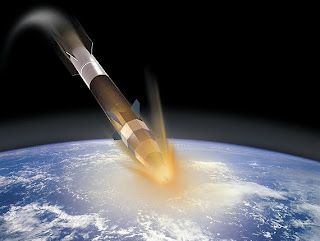 Computer-generated image of the re-entry
Re-entry into Earth's atmosphere is considered one of the most critical moments in spaceflight. To make the journey into space and back to Earth safer, cheaper and more flexible, the German Aerospace Center (Deutsches Zentrum für Luft- und Raumfahrt; DLR) has designed an experimental spacecraft. The Shefex II project uses advanced technologies such as a sharp, angular design and active cooling of the heat shield. For the first time, scientists have tested a model of the spacecraft in a wind tunnel at Gottingen. 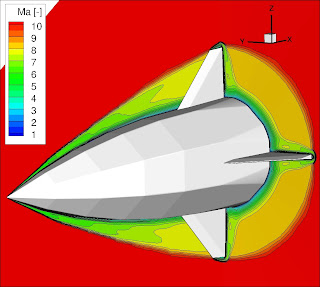 Computer-generated image of the
flow speeds around Shefex II
In early 2011, Shefex II (SHarp Edge Flight EXperiment) is scheduled to lift off from the Australian testing ground at Woomera. This is in many ways a unique spacecraft. Building on the successful Shefex I flight, and unlike previous space vehicles, the outer skin is not rounded, but has sharp edges. Shefex II will test a system for active cooling of the heat shield for the first time in space. It is the only spacecraft project to be financed and run entirely by Germany and has the capability of returning to Earth under automatic control.
Re-Entry at 12,000 Kilometres Per Hour
To check their computer calculations before the flight, the DLR researchers will be simulating re-entry of this spacecraft using a model. Wind tunnel trials are being conducted in the High-Enthalpy Shock Tunnel at DLR Göttingen, one of Europe’s main large-scale facilities for research into hypersonic flight and the re-entry of spacecraft.

In a wind tunnel that is 62 metres long, a piston first compresses propellant gas. After a steel diaphragm bursts, a powerful shock wave compresses and heats a test gas before it is accelerated into the wind tunnel at 10 times the speed of sound. That equates to a speed in excess of 12,000 kilometres per hour.

This gas then flows around the Shefex II model. This simulates the re-entry of a spacecraft into Earth's atmosphere from an altitude of roughly 35 kilometres. "At this point, the test device is experiencing temperatures of approximately 5000 degrees Celsius – as hot as the surface of the Sun," says Dr Klaus Hannemann, who is in charge of the Spacecraft Department at the DLR Institute of Aerodynamics and Flow Technology in Göttingen.
The sharp-edged shape of Shefex promises two substantial benefits. Firstly, this could make heat shield design much simpler and safer. "A Space Shuttle has more than 25,000 differently-shaped tiles. The simple shape of the Shefex tiles reduces the maintenance costs of the thermal protection system and means that in-space replacement becomes feasible," says Dr Hannemann. 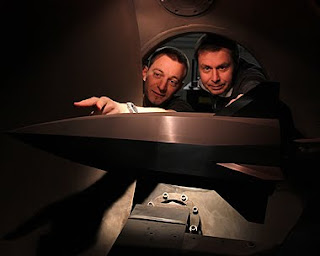 Scientists at the wind tunnel
Furthermore, this multi-faceted shape results in improved aerodynamic properties. "The capsule almost achieves the same aerodynamic properties as a Space Shuttle, but is smaller and does not need to have wings," says Project Manager Hendrik Weihs from the DLR Institute of Structures and Design in Stuttgart. In conjunction with the active cooling system, this opens up new vistas for European space travel. "We could use a landing site in Germany, to which the capsule could return with pinpoint accuracy," explains Weihs.
Cooling Protective Layer
With active cooling of the heat shield, gas flows out through pores in the tiles. "As the gas emerges, it forms a kind of cooling protective layer across the surface, preventing atmospheric gas from making direct contact with the spacecraft," says Weihs. This technology, known as effusion cooling, is already used to cool the combustion chambers of rockets.

"Germany is assuming a pioneering role in relation to advanced re-entry systems," states Weihs as he explains the national Shefex programme. He hopes that the programme will eventually lead to a European spaceflight system, possibly even a manned one. 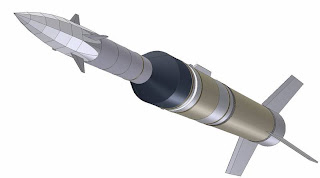 Shefex II on launch vehicle
The goal of the Shefex programme is to test the most cost effective re-entry technology in a flight experiment. To perform the test, the capsule is placed on top of a low-cost sounding rocket. Shefex I was launched in 2005 from northern Sweden. With a height of 12.6 metres, Shefex II will be launched on a Brazilian rocket to achieve a higher velocity. Moreover, in contrast to its predecessor, Shefex II has small wings known as canards, which enable the craft to be manoeuvred. From Woomera, Shefex II should reach an altitude of 200 kilometres. For the researchers, the interesting part begins when it re-enters the Earth's atmosphere. Then the capsule will land in the desert using a parachute.
DLR Locations Throughout Germany Involved
The aerodynamic design, the theoretical forecast of flow characteristics and tests in the plasma wind tunnel have been conducted at the DLR Institute of Aerodynamics and Flow Technology in Braunschweig, Cologne and Göttingen. The Cologne site is responsible for payload instrumentation. The Shefex II experiment itself is being developed, manufactured and integrated by the DLR Institute of Structures and Design in Stuttgart. The deployment of the launcher and the launch operations are being handled by DLR's Mobile Rocket Base (MObile RAketenBAsis; MORABA), which is based in Oberpfaffenhofen. The new DLR Space Institute in Bremen is involved, contributing a navigation experiment to the project. Height of the complete launcher: 12.7 metres

Duration of experiment phase: 53 seconds (from 100 down to 20 kilometres altitude)

Distance between launch and landing sites: 800 to 900 kilometres