It follows a note published on today (06/19) in the website of the National Institute for Space Research (INPE) stating that INPE help studying Paraguayan Chaco.

The methodology developed at the Brazil’s National Institute for Space Research (Instituto Nacional de Pesquisas Espaciais – INPE) to monitor the Panamazonian region is being used for studies of the vegetation known as Chaco, in Paraguay. From satellite images, it is possible to check hydrological characteristics and land use.

Low humidity and droughts are common at Chaco, which covers a large area of South-America – about one million square kilometers spread across southern Bolívia, northern Argentina, western Paraguay and a small part in Brazil. Despite the wide biodiversity, there is a little scientific knowledge about this biome.

At INPE in São José dos Campos (SP), the Paraguayan Chaco is analyzed by Landsat and CBERS images. The information concerns 1973-2012 period. To ensure uniformity and accuracy of the maps, data is corrected due to Geocover mosaics help, made available by NASA.

As a result, the same method created to monitor South-American Amazon vegetation might help research about Chaco changes in the last decades too.

This Project is carried out by reseachers and experts from the Remote Sensing Division of INPE Paulo Martini, Egídio Arai, Yosio E. Shimabokuro and Valdete Duarte. They work along with Agostinho Bombassaro Junior, a researcher from Três Fronteiras University (UNINTER-Assunção), who has got a master's degree at INPE and is working in a thesis about Chaco.

“It is a great opportunity to demonstrate the scope of this methodology, which was already successfully tested in other biomes, but never in such a particular region as the South-American Chaco,” said Paulo Martini, for INPE. 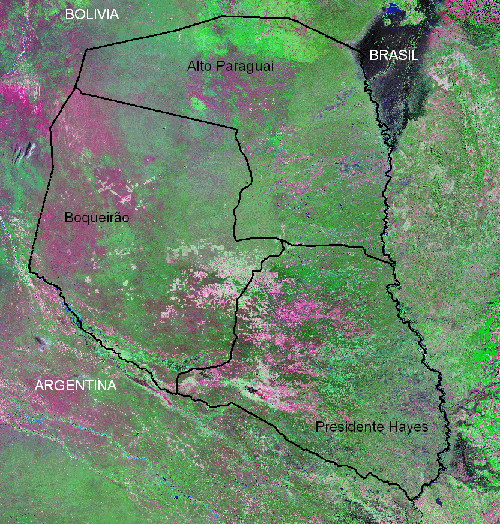 This image shows a portion of the biome in Paraguay
little vegetation and water (Source: NASA/GEOCOVER-1990) 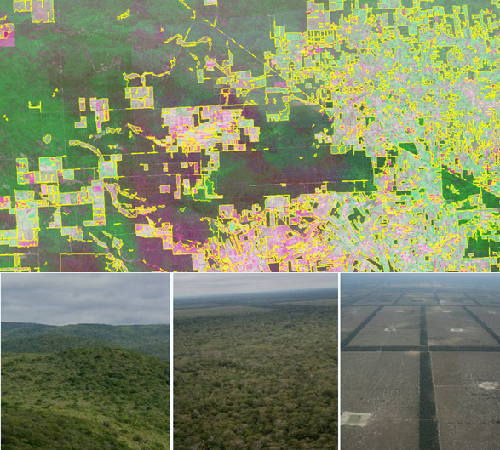 Panoramic views of the Chaco and the new agricultural boundaries
(Sources: Agência Guyra and NASA/GEOCOVER)