It follows a note published on the day (06/04) in the website of the National Institute for Space Research (INPE) informing that the INPE testing the first National Propulsion Subsystem for Satellite.

The test of the Amazônia-1 propulsion subsystem will be held in the coming days by the Laboratory for Combustion and Propulsion (Laboratório Associado de Combustão e Propulsão – LCP) of the Brazil’s National Institute for Space Research (Instituto Nacional de Pesquisas Espaciais – INPE), in Cachoeira Paulista. This is the first satellite propulsion subsystem that will orbit Earth developed entirely in Brazil.

The qualification of space systems requires a prior simulation of orbit operating conditions. On the Test Stand with Altitude Simulation (Banco de Testes com Simulação de Altitude - BTSA), of the LCP/INPE, the propulsion subsystem containing a tank with 45 liters of hydrazine, the fuel used by thrusters, will be tested by simulating the same procedures as the attitude and orbit control computer will use to the satellite in space.

BTSA facilities are closed during the tests, which is planned for June 11 and will continue for several days. Firefighters monitor the procedures and technicians wear masks and special clothing during the equipment operation. In the vacuum chamber test, the hydrazine gases used in the combustion go by a large neutralization system for handling and releasing into the atmosphere without toxicity.

The propulsion subsystem of the Multimission Platform (Plataforma Multimissão – PMM) created by INPE to be a basis of satellites like Amazônia-1 and Lattes, was developed by the Brazilian company Fibraforte and coordinated by INPE’s Engineers.

Created in 1999, the Test Stand with Altitude Simulation (Banco de Testes com Simulação de Altitude - BTSA) main purpose is to test thrusters used in space maneuvers, needed for the placement and orbit maintenance of the satellites and space platforms. It is dimensioned to test and describe drivers thrust up to 200N, in an environment that simulates the space conditions. The BTSA also houses a laboratory of propellants - hydrazine, mono-methyl-hydrazine, dimethyl hydrazine asymmetric, nitrogen tetroxide, among others.

The test stand, originally aimed at testing individual thrusters, was adapted with innovations for testing the propulsion subsystem with four thrusters simultaneously.

Besides the subsystem test, one of the thrusters is being tested with a national catalyst (hydrazine reagent) manufactured by LCP, seeking independence from importation.

The BTSA equipment are commanded and controlled from a control room, using automatic sequencers managed by software, which controls the vacuum set, the cooling system and thrusters’ monitoring. The BTSA has a security system for pressure monitoring in the vacuum chamber and for possible leaks of hydrazine in the test environment.

An acquisition system stores data concerning tests campaign for further processing and analysis. Some important parameters of the tests can be observed in real time trough computer monitors. 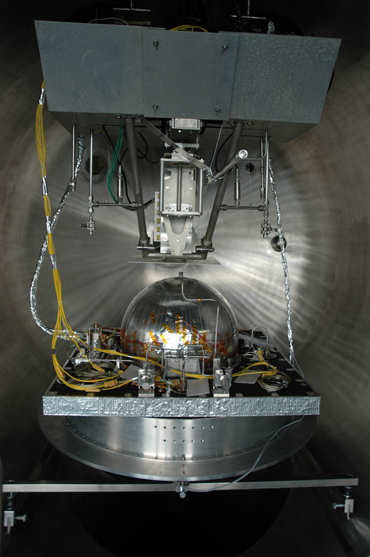 The propulsion subsystem to be tested at BTSA 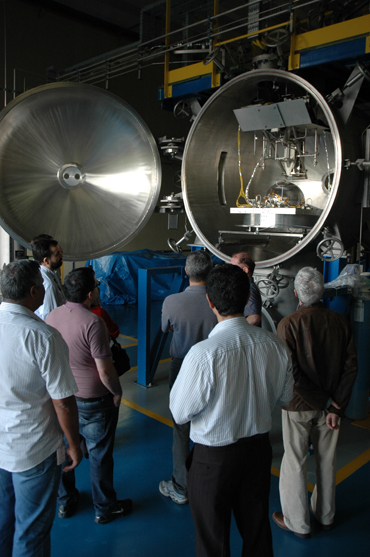 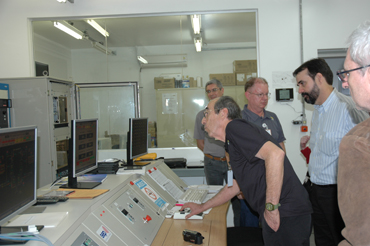 Technical visit to the control room of the BTSA 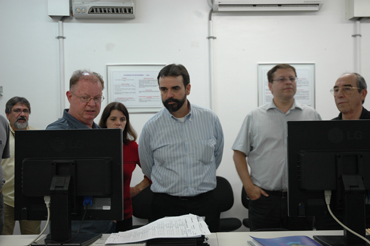 Thyrso Villela Neto (in the middle), director of Satellites,
Applications and Development for AEB, during the technical visit

Source: Website of the National Institute for Space Research (INPE)