INPE Air Quality Model Will Be Part of European Program

It follows a note published on the day (06/26) in the website of the National Institute for Space Research (INPE) informing that a Model of Air Quality Forecasting of CPTEC/INPE will be part of European Program.

The model for air quality forecasting of the Brazil’s National Institute for Space Research (Instituto Nacional de Pesquisas Espaciais – INPE) has been approved to participate in the European Cooperation in Science and Technology Programme (COST), which gathers research institutions of Europe. Brazil will be the only country of Latin America and Southern Hemisphere to participate. From outside the continent, institutions from Israel and United States are also participating.

It is thought by the coordinator of the Group of Atmospheric Modeling and Interfaces (GMAI), of CPTEC/INPE, Saulo Freitas, that this is a great opportunity to improve BRAMS, a meteorological model coupled to the atmosphere chemistry model, used by CPTEC to forecast the air quality. "Researchers of GMAI will have the chance to discuss and expand scientific and technological knowledge that are in all the steps of the modeling: from the physico-chemical processes of the atmosphere to the forecasts generation," said Freitas. These stages include the definition of the phenomena considered essential to the prediction and the development of computer codes.

To be tested and evaluated, the model of CPTEC/INPE must be adapted to European conditions. Freitas argues that a setback of the group is the lack of observed data on atmospheric chemistry for the modeling evaluation, differently of Europe, which is equipped with wide data network.

The coordinator of GMAI and head of the Modeling and Development Department (DMD) of CPTEC/INPE, said that he aims to bring to the European Program the Brazilian concern on the aerosols effects and energy balance (thermal radiation) whose impacts affect the climate and rainfall regimes. In large cities, pollution and warming are related to the increase in heavy rainfall, causing instability in the power grid, floods, and other urban problems.

Freitas points out that the air quality and meteorology model, although developed and maintained by a small group of researchers, has already achieved important milestones and international recognition. The National Center for Atmospheric Research of the United States has incorporated the model of emission and transport of pollutants of BRAMS model, of CPTEC/INPE, into its meteorological model (WRF), which performance is considered one of the best in the world. The initiative was also followed by the British, concerning the climate model of MerOffice, the Hadgen, while the European Centre for Medium-Range Weather Forecasts (ECMWF) has recently highlighted the initiative of the Brazilian model to incorporate data from forest fires in the air quality and meteorology models. 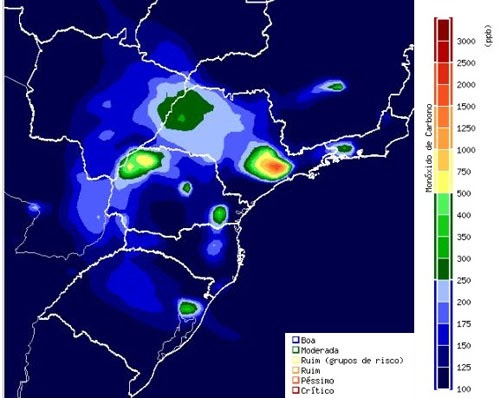