It follows an article published on the day (18/04), in the website of the “German Aerospace Center (DLR)", stating that the spacecraft SHEFEX II undergoes final tests before launch. 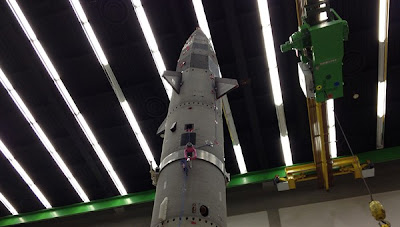 The SHEFEX II (SHarp Edge Flight EXperiment) spacecraft successfully withstood vibration on a shaker and spinning at two rotations per second. These tests represented the final simulation of the conditions that the space vehicle will be subjected to during its launch in the summer of 2012. Researchers at the German Aerospace Center (Deutsches Zentrum für Luft- und Raumfahrt; DLR) will use SHEFEX to investigate how a space vehicle can re-enter Earth's atmosphere as safely and cost-effectively as possible following a spaceflight.

Equipped with numerous experiments, a camera, pressure, temperature and heat flow sensors, and antennas – the SHEFEX spacecraft will lift off from the rocket range on the Norwegian island of Andøya, reach an altitude of 250 kilometres and later re-enter the atmosphere at 11 times the speed of sound. "With this mission, we are entering uncharted technological territory," says project leader Hendrik Weihs from the DLR Institute of Structures and Design. The space vehicle must withstand temperatures of over 2000 degrees Celsius as it re-enters and lands by parachute in the vicinity of Spitsbergen. The shape of the experimental vehicle is particularly unusual; where conventional spacecraft tend to have rounded contours, SHEFEX II has straight edges and corners. "The straight-edged shape has the benefit of making manufacture of the thermal protection system significantly less costly. The straight leading edge also improves its aerodynamic properties," explains Weihs. The vehicle consists of separate, smooth faces that are easier, and therefore less expensive, to manufacture than, for example, the individually shaped tiles on a Space Shuttle. The researchers are also using the space vehicle to test various thermal protection systems during the 45-second re-entry phase. A total of six DLR institutes and facilities are involved in the SHEFEX II mission: the Institute of Aerodynamics and Flow Technology, the Institute of Structures and Design, the Institute of Flight Systems, the Institute of Materials Research, the Institute of Space Systems and the MORABA mobile rocket base (MObile RAketen BAsis).

Vibrating and Rotating at High Speed

Following tests in the laboratory at Astrium Ottobrunn, the researchers can be sure that the vehicle will withstand the loads during launch and the subsequent flight without problems. "In order to stabilise itself during flight, the rocket must rotate continuously," explains John Turner, who is responsible for the deployment of MORABA – which will launch SHEFEX from the Norwegian base. The engineers balanced the vehicle in preparation for this rotation similarly to how a car wheel is balanced. Evaluation on the shaker was also part of the final mechanical tests. In the first few seconds after launch, a rocket payload is subject to severe vibration – the shaker simulates this situation. "After each test we checked that everything was still functioning properly."

With the SHEFEX II mission, the researchers are drawing on their experience with the SHEFEX I vehicle, launched on 27 October 2005 from Andøya. But SHEFEX II will be flying at twice the speed, can be actively controlled during re-entry for the first time and offers twice the experimentation time. Plans for a third SHEFEX mission are currently underway. The aim of the three missions is to gather information for the design of a new type of re-entry vehicle able to return to Earth undamaged – and that is therefore reusable – following a period of experimentation in microgravity. The REX Free Flyer (Returnable Experiments in Space) is being looked at as an initial application example. As of 2020, this sharp-edged space glider could be flying microgravity experiments for a few days and then landing again at a conventional airport. "This would narrow the gap between a few minutes of microgravity, as with the DLR TEXUS flights, and the permanent microgravity on board the International Space Station," says Hendrik Weihs.

DLR, the German Aerospace Center, is Germany's national research centre for aeronautics and space. Its extensive research and development work in aeronautics, space, energy, transport, defence and security is integrated into national and international cooperative ventures. As Gemany's Space Agency, DLR is tasked with the planning and implementation of Germany's space programme. 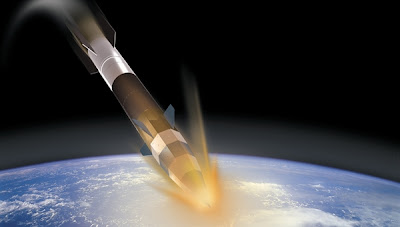 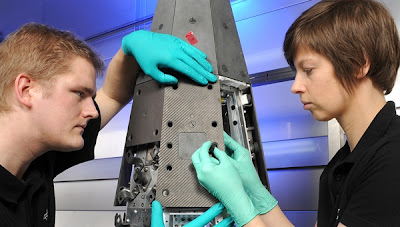 Installing the tip of SHEFEX II 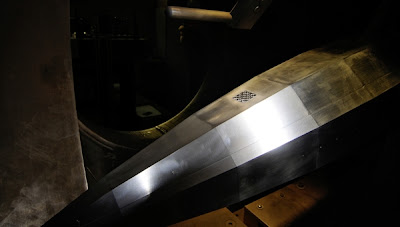 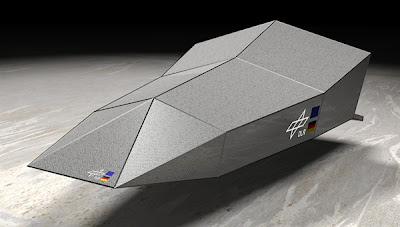