It follows a note published on the day (04/07) in the website “Parabolic Arc” with some information on the current state of Brazilian Space Activities.

Some updates on the Brazilian space program: 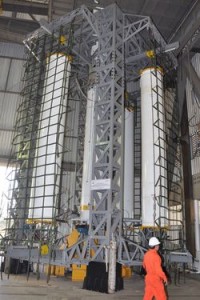 * Officials have budgeted $2.2 billion over the next three years for the nation’s space program, according to press reports. The largest chunk of the funds will go toward efforts to launch Ukraine’s Cyclone-4 rocket from Brazil’s Alcantara Launch Center. The inaugural flight is currently scheduled for late 2013. Another key priority is the CBERS-3 environmental satellite that Brazil is developing with China.

* On March 29, engineers conducted the second test on the separation of the four drives of the first stage of the new VLS-1 rocket, a small satellite booster set to make its inaugural flight later this year. “Measurements were made of mechanical shock, vibration, almost static, distortion, simultaneous separation of the four drivers of the first stage, displacement, and the cover photo and video (HD and high speed),” according a press statement.

* Brazil and India have agreed to strengthen cooperation in “such as remote sensing, data sharing and weather,” according to a joint communique issued after a summit between Brazilian President Dilma Rousseff and Prime Minister Manmohan Singh. “Brazil reiterated the desire to receive satellite images from Indian ResourceSat-2, given the successful cooperation in receiving data from an in-ResourceSat Ground Station Cuiabá. With regard to IBSA Satellite Project, the two leaders expressed their great interest in working together for the success of the program. A technical meeting is to be held in Bangalore in 2012.”

* The two leaders also agreed to Indian cooperate in Brazil’s Science Without Borders program, under which the South American country seeks to educate 75,000 students abroad. The cooperation will involve an exchange of students and educators between the two nations and other educational activities.