Visit of the Brazilian Military Delegation to the Ukraine

setembro 21, 2010
Hello reader!
It follows one communicates published in english on the day (16/09) in the site of the National Space Agency of Ukraine (NSAU) detaching the official visit of the "Brazilian Military Delegation" to the Ukraine led by the Minister of the Defense, Nelson Jobim.
Duda Falcão

Presentation of the Construction Project of

Space-Rocket Complex “Cyclone-4” at Brazilian
Space Port Alcantara was Made in Kyiv
16/09/2010
Sep. 15, 2010 - Presentation of the Cyclone-4 space-rocket complex was made at the state enterprise of the Ministry of Defense of Ukraine “Central Project Institute”.
Brazilian military delegation headed by the Minister of Defense of the Federative Republic of Brazil Mr. Nelson Jobim who paid an official visit to Ukraine was among participants of the meeting. Ukrainian party consisted of the Minister of Defense of Ukraine Mr. Mykhaylo Yezhel’, Deputy Director General of the National Space Agency of Ukraine Mr. Sergiy Zasukha, Chief of Space Programs Dep. of NSAU Mr. Gusynin, representatives of Ukrainian military agencies, experts of the SE “Central Project Institute” and SDO “Yuzhnoye”.
Presentation of the project of Cyclone-4 space-rocket system was made by Director of the “Central Project Institute” Mr. Oleg Pryimachuk. The event also included presentation of the Cyclone-4 launch vehicle provided by Mr. Viktor Frolov of SDO Yuzhnoye.
At the end of presentation the Minister of Defense of Brazil Mr. Nelson Jobim was awarded with the official reward of the National Space Agency of Ukraine the Yangel’ Medal.
Accepting Ukrainian medal Mr. Jobim stressed out that this reward is a symbol of bilateral relations and technological cooperation extension. He also said that the first launch of Cyclone-4 LV is planned for 2012. 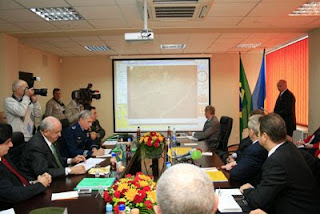 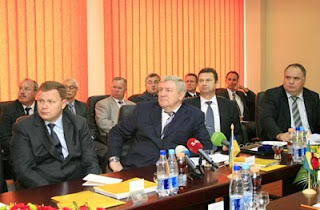 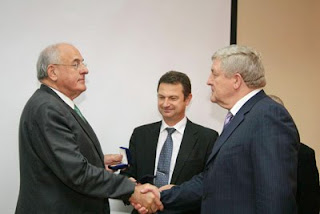 Note - In 2004 the State Enterprise of the Ministry of Defense of Ukraine “Central Project Institute” became won the tender and was designated a developer of initiate project data and volume-planning decisions with regard to on-ground facilities for Cyclone -4 LV in Brazilian State Alcantara. In 2005-2006 experts of the Central Project Institute and SE Yuzhnoye elaborated Preliminary design proposals for selection of the pads for deployment of the ground complex for Cyclone-4 LV; engineering reconnaissance and designing of the facilities for perspective space port was also conducted.

In spring 2009, experts of the Central Project Institute successfully completed the first stage of reconnaissance works at the future cosmodrome in Alcantara State. Following the results of works in Brazil conducted by the specialists of the Central Project Institute jointly with representatives of Alcantara Cyclone Space Co., National Space Agency of Ukraine, SDO Yuzhnoye and Brazilian company ATECH preliminary resolutions were made concerning allocation of the ground complex for Cyclone-4 LV.

Main facilities of the technical complex:

3. Building for preparation of erector; 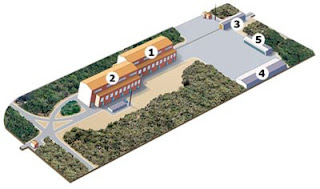 Main facilities of the launching complex: 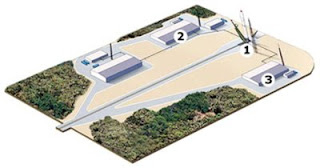 Construction works on the ground complex shall start in 2010. At present, intensive works are carried out in vegetation clearing of the 500 ha area, where the space rocket system will be deployed.