I bring to you now informations about the "Brazilian Project of the Hypersonic Vehicle 14-X". This project of vanguard that is being developed by the Institute of Advanced Studies (IEAv) of the Brazilian Air Force (FAB) takes as an objective the development of a hypersonic vehicle aiming at the launch of microssatelites in a term from 15 to 20 years. The first flight tests of the vehicle it is predicted to take place in the second semester of 2012. 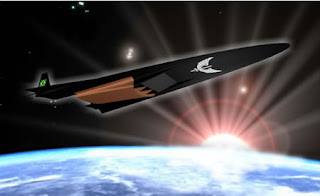 The main technological challenges to the 14-X Project are:

The airbreathing propulsive system that provides the grater specific impulse thrust in hypersonic speeds is the SCRAMJET that uses hydrogen gas as fuel.

The main difference between a SCRAMJET and a conventional Jet engine is that the first doesn’t have movable parts to compress the air, because it is done by reflected shock waves on its internal walls.Besides, in a SCRAMJET supersonic speeds are allowed inside its combustion chamber. With these features, this kind of engine provides conditions to fly at very high altitude and in hypersonic speeds using air from the atmosphere. 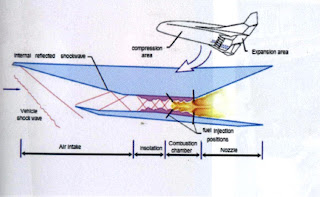 A “waverider” vehicle could be defined as a supersonic or a hypersonic vehicle which uses the high pressure zone on its lower surface caused by leading-edge attached shock wave to generate lift. The interest in hypersonic “waverider” vehicles lies on the promise of an air breathing reusable vehicle able to deploy a payload into earth orbit. Until now, research hás shown that a “waverider” vehicle has superior aerodynamic performance compared with other hypersonic aerodynamic concepts as accelerators and as aerogravity-assisted maneuvering vehicles. They are also being considered for high-speed long-range Cruise vehicles since their high lift-to-drag ratio becomes important in achieving global range. 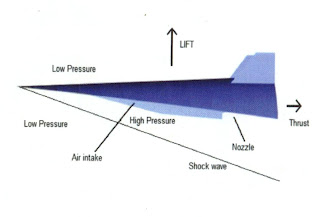 The 14-X Program has many bases of technology research. Among them are the supersonic combustion, aerothermodynamics, waverider concept and thermal protection. A powerful test facility for this research are the Shock tunnels, that can provide high Mach number and high temperature gas flow that simulates the real environment that the 14-X would face during its flight test. One example is the T3 Shock tunnel, 24 meters long, that can provide flows with speed from Mach 7 to 28.