I bring to you now informations about the "Brazilian Project of the Sounding Rocket VSB-30". This project was developed by the Institute of Aeronautics and Space (IAE) of the Brazilian Air Force (FAB) by solicitation of the German Aerospace Center (DLR) in order to attend the “European Microgravity Program”. This rocket already carried out nine well succeeded flights and it is prepared to carry out one more mission now in october from the Center of Launch of Alcântara (CLA) that is located in the brazilian state of Maranhão.

The “Unified Microgravity Sounding Rocket Program for the Future”, was established by a consortium of organizations (DLR-MORABA, Astrium GmbH, Swedish Space Corporation e Kayser-Threde GmbH) in order to perform microgravity experiments by means of sounding rockets. Among these experiments , is included in the program TEXUS, whose launch was carried out with the vehicle Skylark 7.

In 2001, the German Space Agency (DLR) has consulted the Institute of Aeronautics and Space (IAE) on the possibility of developing a “Booster” for employment in the European Microgravity Program, replacing the vehicle Skylark 7 that left to be produced.

This development coincided with the interests of Brazil, not only by the commercial aspect but also because of the possibility of employment in Microgravity Project of the Brazilian Space Agency (AEB), and the agreement between the Aerospace Technical Center (CTA) and DLR/MORABA became reality.

On June 15, 2004, the Institute of Aeronautics and Space, iniciated the Certification Process by the Institute of Development na Industrial Coordination (IFI), and five years later, the certificate to the prototype of the VSB-30 was obtained.

The contribution of certification on the reliability for a space rocket is hard to quantify. However, a significant reduction in failures has been observed in all projects that have adopted this procedure. In the case of VSB-30, all test performed have achieved success. 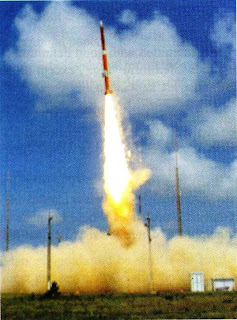