An Interview with Gilberto Camara, Head of Brazil's INPE 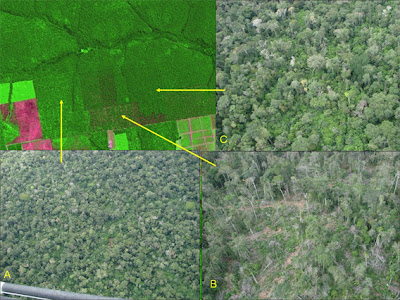 ﻿﻿
﻿﻿mongabay: Given that Brazil is now recognized as a leader in deforestation monitoring, is INPE helping other countries develop similar tools?
Gilberto Camara: During COP-15 in Copenhagen, INPE signed an agreement with FAO to support other tropical countries in building their monitoring systems, with support from the UN-REDD program. We established a new Regional Center in Amazonia, which will support FAO and provide training and all support needed for the interested countries. Our agreement with FAO includes countries in Latin America and in the Congo Basin. INPE will transfer our TerraAmazon software, which is the system that supports PRODES and DETER, at no charge.
mongabay: Deforestation monitoring has traditionally been limited by cloud cover. Can you tell us how INDICAR may help extend your capabilities?
Gilberto Camara: I'm not completely familiar with the INDICAR system that is being established by IBAMA. We know the main limitation is the access to real-time radar images from the Japanese ALOS satellite. We are currently negotiating with the Japanese Space Agency (JAXA) to receive ALOS radar images in real-time in Brazil, but no final agreement has been reached.
mongabay: How will your soon-to-be launched satellite help research or monitoring efforts?
Gilberto Camara: CBERS-3 combines four optical cameras: (a) a CCD camera with 20 meter resolution and 120 km swath; (b) a PANMUX camera with 5 meter resolution and 60 km swath; (c) a AWFI (Advanced Wide Field Imager) with 70 meter resolution and 860 kw swath; (d) an InfraRed camera with 40 meter resolution and 120 Km swath with bands on short-wave and thermal infrared. Thus CBERS-3 will combine the capability of making rapid assessments with the AWFI camera, detailed assessments with the CCD camera, and verifying these assessments using the PANMUX camera. This will allow us to improve significantly our DETER system and also to have a better assessment of its accuracy.
CBERS-3 is thus capable of providing full support to the MRV (monitoring, reporting and verification) requirements for REDD.
mongabay: Looking toward the future, what do you see as the biggest opportunity in earth monitoring? What is the biggest challenge to realizing this opportunity?
Gilberto Camara: Currently, operational systems such as PRODES and DETER are limited to providing information about land cover change. We need much more. We need information systems that give us information about land use and land function. Now that Brazil is succeeding in its commitments to reduce deforestation, we should focus on how we use our land. Efficient and sustainable production of food requires qualified information. When we consider the whole tropical belt, Africa and Latin America need to have good monitoring systems to increase their agricultural productivity while not endangering the environment.
Thus, the evolution of operational land cover change systems (PRODES and DETER) to operational land use monitoring systems in one of the major challenges in Earth Observation for the coming decade. This will require the use of multiple satellites, whose combined information should provide global medium-resolution data every 2 to 4 days. We have learned a lot from MODIS, whose data is changing remote sensing worldwide. We now know we need a LANDSAT-class image every day. Exploring multi-temporal data obtained by combining different medium-resolution satellites is the biggest challenge faced by the Land Observation community.
INPE's site in English
Source: WebSite www.mongabay.com
Foreign news–English and Spanish