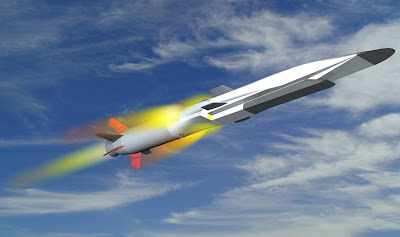 Airbreathing hypersonic propulsion entered a new era in 2010. The 7.9‐m‐long X‐51A WaveRider, powered by a Pratt & Whitney Rocketdyne scramjet engine, made aviation history on May 26 with the longest ever scramjet‐powered flight. “This first flight test brings aviation closer than ever to the reality of regular, sustained hypersonic flight,” said Curtis Berger, director of hypersonic programs at Pratt & Whitney Rocketdyne. “We are very proud to be part of the team that made this possible.”
The X‐51A program is a collaborative effort of AFRL, DARPA, Boeing, and Pratt & Whitney Rocketdyne. During its flight, the WaveRider was carried beneath an Air Force B‐52 and dropped from an altitude of 50,000 ft. A rocket booster propelled the cruiser to a speed greater than Mach 4.5, creating the supersonic environment necessary for starting its flight. Separating from the booster, the SJY61 scramjet ignited, initially on gaseous ethylene; it then transitioned to JP‐7 fuel.
The achievement is significant, because this is the first hypersonic flight by a hydrocarbon‐ fueled scramjet. “We are ecstatic to have accomplished many of the X‐51A test points during its first hypersonic mission,” declared Charlie Brink, X‐51A program manager with AFRL. Brink called the leap in engine technology “equivalent to the post‐WW II jump from propeller‐driven aircraft to jet engines.”
On that historic day, the X‐51 launched about 10 a.m. from Edwards Air Force Base, carried aloft under the left wing of an Air Force Flight Test Center B‐52 Stratofortress. Then, flying at 50,000 ft. over the Pacific Ocean Point Mugu Naval Air Warfare Center Sea Range, it was released. Four seconds later, an Army Tactical Missile solid rocket booster accelerated the X‐51 to about Mach 4.8 before it and a connecting interstage were jettisoned.
The launch and separation were normal. Then the SJY61 scramjet engine ignited, initially on a mix of ethylene and JP‐7 jet fuel, then exclusively on JP‐7 jet fuel, the same fuel once carried by the SR‐71 Blackbird. The hypersonic demonstrator vehicle reached an altitude of about 70,000 feet and a peak speed of Mach 5.
The vehicle's fuel‐cooled engine, circulating 270 pounds of fuel serves both to heat the JP‐7 to an optimum combustion temperature and to help the engine itself endure extremely high operating temperatures during the long burn. Without such active cooling, the temperatures in the scramjet could reach 5,000°F, high enough to melt virtually any metal on Earth. Solving the cooling challenge is a major AFRL/Pratt & Whitney achievement.
The much anticipated hypersonic flight did not reach its maximum hypersonic speed and it flew autonomously for only 200 seconds before losing acceleration—its scramjet is designed for Mach 6 and burn for 300 seconds. But as stated by Joe Vogel, Boeing Director of Hypersonics and X‐51A Program Manager, "This is a new world record and sets the foundation for several hypersonic applications, including access to space, reconnaissance, strike, global reach and commercial transportation." 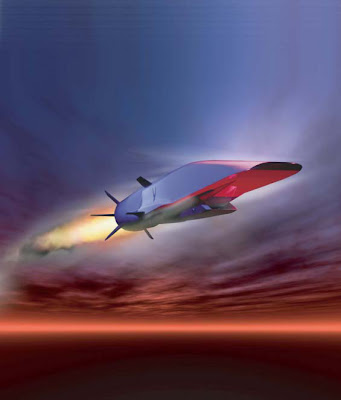 The unmanned X‐51A WaveRider, powered by
the P&W Rocketdyne SJY61 scramjet engine,
is designed to ride on its own shockwave 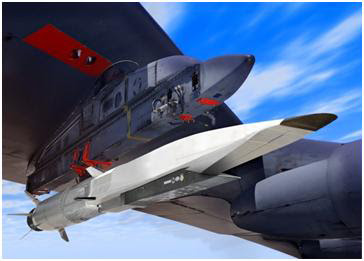 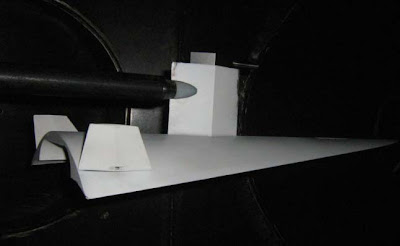 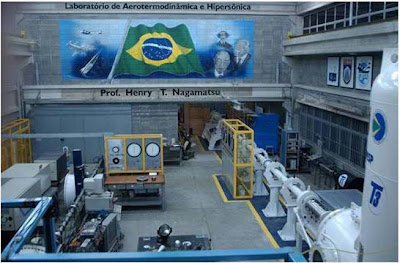 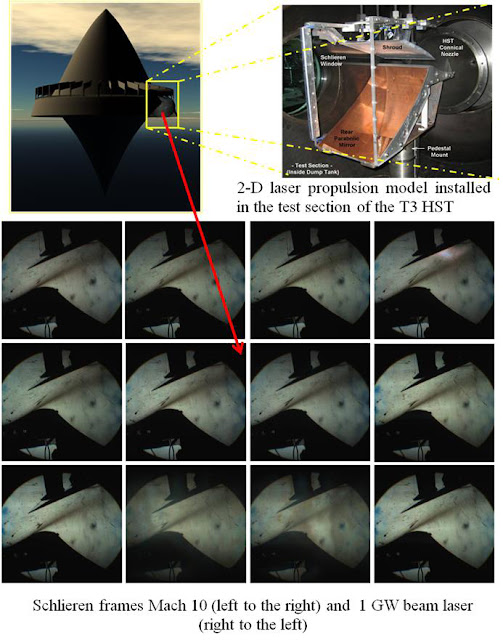 Hypersonic Aerospace Vehicle DVPL (left). 2-D laser
propulsion model installed in the test section of the T3
Hypersonic Shock Tunnel. Montage of the schlieren
frames (left to right) for Mach 10 hypersonic flow and 1
GW laser power (time between frames 10 μs)
Initiated in 2008 and in collaboration with the U.S. Air Force Office of Scientific Research’s, the DVPL is the first Brazil‐USA Laser Propulsion Experiment with the objective to design, develop, construct and demonstrate in free flight laser propulsion technology.
A 2‐D Mach number 10 Laser Propulsion Vehicle model designed and built by Prof. Leik N. Myrabo from Rensselaer Polytechnic Institute (Troy, NY), was experimentally investigated in the T3 Hypersonic Shock Tunnel (HST). Additional testing is expected in 2011.
HYPERSONICS PROGRESS IN FRANCE
France has a legacy of hypersonic air breathing propulsion system assessments and technology development dating back to the 1980s. In 2010, MBDA and the French National Aerospace Research Establishment (ONERA) pursued their R&T effort related to hypersonic air breathing propulsion mainly thanks to French State support but also with limited support from European Union.
MBDA and ONERA are to receive by the end of 2010, from French Administration, the contract covering all the remaining part of their flight testing program LEA. The goal of the LEA program is to establish, apply and validate a methodology for development of hypersonic air breathing vehicles. The LEA experimental vehicle should be flight tested in timeframe 2013‐2015 in the Mach number range 4 to 8 by using existing Russian supersonic bomber, liquid rocket booster and test range.

ONERA‐MBDA LEA Vehicle
The first test series have been achieved in the new METHYLE test facility providing capability to simulate up to Mach 7.5 flight conditions for large scale direct connected pipe test with test duration up to 1000s. In parallel, the upgrade of the ONERA S4Ma wind tunnel has been pursued to provide a large scale Mach 6 free jet test capability which will be used for LEA program in spring 2011.
Design activities were performed in the frame of the European LAPCAT2 studies related to high speed transport system. MBDA and ONERA contributed to the design challenge of a Mach 8 system.
HYPERSONICS ADVANCES IN JAPAN
JAXA (Japan Aerospace Exploration Agency) conducted RBCC model combustion experiments at Mach 11 conditions in the High Enthalpy Shock Tunnel (HIEST), following sea‐level static, Mach 4 and Mach 6 tests. The rocket engine in the RBCC produces most of the thrust, while the supersonic combustion engine assists in production of thrust. A detonation tube was used in the test to supply large amount of combustion gas as rocket exhaust in a short period.
﻿ 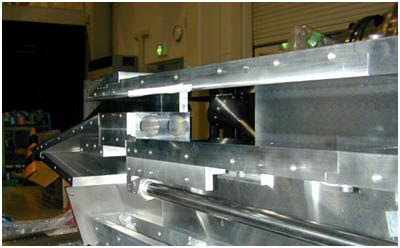 Inside JAXA’s M11 experimental RBCC model.
It has two rocket nozzles, connecting to
a detonation tube by a pipe below 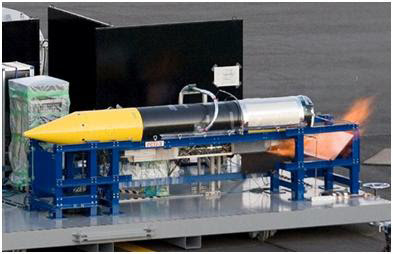 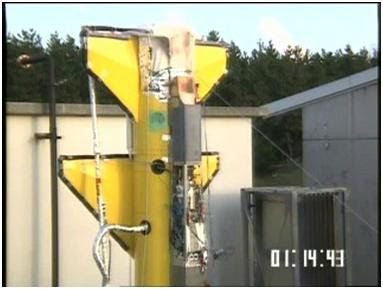 JAXA’s vertical firing test of pre‐cooled turbojet engine
Researchers at JAXA also plan a Mach 2 flight experiment of the hypersonic pre‐cooled turbojet engine model using a stratospheric balloon. Ground firing tests were already conducted with both horizontal and vertical attitude to evaluate the effect of gravity force in a free‐fall flight. The starting characteristics of the air‐intake were also obtained in a supersonic engine test facility.
RUSSIA HYPERSONICS SUCCESS
Successful tests of a large‐scale scramjet model‐demonstrator integrated with an airframe simulator of an experimental hypersonic flying vehicle (HFV) were run for the first time at the Central Institute of Aviation Motors, Russia, in April, 2010. The tests were conducted within the framework of the Federal Research Program (FRP) “National Technological Base” (NTB).
The demonstrator tests followed successful complex thermo‐gasdynamic studies of small scale integrated models of HFV “propulsion + airframe” and their components, as well as launching tests of a powerful high‐altitude hypersonic rig of 1.2 m nozzle diameter at the end of March, 2010 during its technical upgrading within the framework of FRP “NTB”. The exhauster machines of altitude‐compressor station provide for vacuum in the rig working section. A generator of high‐enthalpy air flow made within a state contract with the Rosnauka produces the required total working gas parameters appropriate to flight hypersonic speeds. The rig allows studying the working process in integrated experimental “engine + HFV” objects with simulation of hypersonic flight conditions.
﻿ 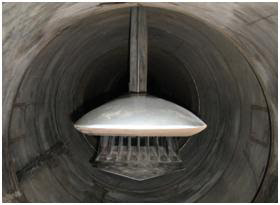 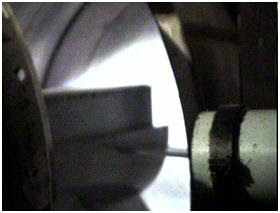 Tested rig model was displayed in the
International Aerospace Salon MAKS‐2009
SCRAMJETS/ROCKETPOWERED SPACE LAUNCHERS
Engineers at NASA KSC proposed a scramjet‐powered vehicle that can be rail‐launched all the way to orbit.
In the proposed 10‐year plan, a wedge‐shaped vehicle powered by a scramjet engine is launched horizontally along an electrified track, or gas powered sled, carrying a pod or spacecraft destined for low Earth orbit (LEO). The scramjet would fly the vehicle to Mach 10 to reach the upper edge of the atmosphere where a small rocket would fire off and propel the vehicle into orbit. The hypersonic craft would come back and land on a runway by the launch site.
The so called Advanced Space Launch System, comprised of railgun, scramjet, and rocket, was recently unveiled by Stan Starr, branch chief of the Applied Physics Laboratory at Kennedy in Florida. He indicated that the system counts on the availability of a number of existing technologies. His team is already working on a rail launcher using gas propulsion, and they are applying for funding under several areas, including NASA’s technology innovation, to develop and further mature the needed technologies. If successful, this new launch approach can revolutionize access to space.
There are some technical challenges to overcome first. According to the NASA team, to launch on an electrified track, for instance, the track would have to withstand at least 10 times the speeds commonly seen on tracks used for roller coasters. Roller coasters typically run about 60 mph (100 km/h).
﻿ 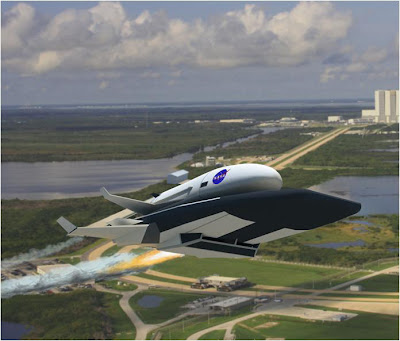 Proposed NASA Launcher Configuration
(Ref. S. Starr, NASA KSC)
NASA is also investigating other methods of powering a track‐launched vehicle. Engineers with NASA’s Marshall Space Flight Center in Huntsville, AL, have already tested a prototype track‐based system that uses magnetic levitation to accelerate vehicles to launch speeds.
There are several studies underway to examine new launch architectures. The USAF, for example, is looking for architectures to eventually replace the existing EELV’s (Delta IV and Atlas V) which involve vertical rocket launch of a hypersonic stage. DARPA is studying scenarios that involve runway take off. All of these studies are based on the belief that practical scramjet propulsion is going to provide a design alternative in the 20‐year time frame so that reusable air breathing launch stages can be built and used routinely. The question seems to be, “what launch architecture optimizes the contribution by air breathing?” We know that the final stage into orbit has to be a rocket. We also know that the higher the initial velocity, the lower the mass of the air breathing propulsion system. For example an integrated vehicle taking off from a runway will require large low speed turbines in addition to high speed turbines, ram and scramjet engines (a lot of engines). According to Stars, if we can launch a vehicle from a rail with an initial velocity of Mach 0.5 we can decrease the size of the low speed turbines, but they are still required (although we do save propellant, wing mass, landing gear mass and other benefits). If we launch at Mach 1.5 we can launch with high speed turbines plus RAM/SCRAM. We also incur high dynamic pressures (increased structural mass) and environmental effects from sonic boom.
So Starr’s basic concept is to launch at a higher velocity than previous studies considered, thereby significantly simplifying the propulsion system and reducing weight. Of course those benefits must be weighed against a more complex total system (track) and the associated costs.
As for the scramjets, KSC engineers will draw from the experience gained through recent scramjet flight demonstration testing, including NASA’s X‐43A and the U.S. Air Force’s X‐51, both of which have shown that scramjets can achieve the required speeds for the proposed rail launcher.
Starr and his NASA KSC engineering team proposed a 10‐year plan that would begin with launching a drone similar to those used in the ongoing Air Force tests. More‐advanced models would then follow, with the goal of developing a vehicle that can launch a small satellite into orbit.
The proposed Advanced Space Launch System is not meant to replace NASA’s space shuttle fleet, which is schedule to retire next year, or any other manned spacecraft program, Starr said. But if this system is proven successful for unmanned launches, Starr believes that it could eventually be adapted to carry astronauts. 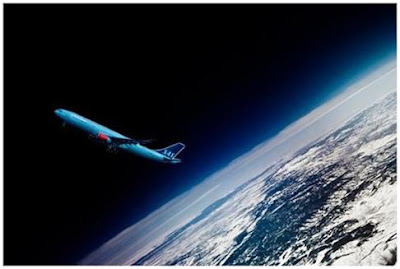