NASA has announced that Aquarius/SAC-D already "tastes" the saltiness of Earth's ocean surface salinity. The satellite has been tested at the Brazil's National Institute for Space Research (Instituto Nacional de Pesquisas Espaciais - INPE) in Sao Jose dos Campos (SP), and launched from California's Vandenberg Air force Base (USA) on June 10.
The Aquarius/SAC-D, a collaboration between NASA and Argentina's space agency (Comisión Nacional de Actividades Espaciales - CONAE), will measure salinity, or concentration of salt, at the ocean surface through a radiometer and a radar scatterometer built by NASA's Jet Propulsion Laboratory in Pasadena, Calif., and the Goddard Space Flight Center in Greenbelt, Md. To date, salinity levels data have been collected only from local samples (in situ), using boats and buoys.
As the water temperature, salinity helps to understand ocean's deep circulation and influences ocean's water density, which helps to drive Earth's climate; Therefore, satellite data will contribute to improving the long-term climate models.
The Aquarius science team will spend coming months analyzing and calibrating the measurements and releasing preliminary data, which will be used by scientists from around the world.
Tests
From June 2010 to March 2011, INPE conducted tests and trials in its Integration and Testing Laboratory (Laboratório de Integração e Testes – LIT) to prove that Aquarius/SAC-D was able to withstand the launch and space environment.
During the physical measurements and environmental testing campaign, more than three hundred people worked at LIT/INPE, the only laboratory of its kind in Southern Hemisphere able to assembly, integrate and test satellites and their subsystems.
Interference and electromagnetic compatibility, vibration, acoustic-vibro, separation shock, and thermal vacuum tests were conducted, further to satellite mass properties measures. It is necessary to simulate on Earth all conditions satellite will face since its launch by the end of its life in space, due to the impossibility of making repair in orbit.
For more information about Aquarius/SAC-D, visit: http://www.nasa.gov/aquarius and http://www.conae.gov.ar/eng/principal.html
About LIT/INPE: www.lit.inpe.br 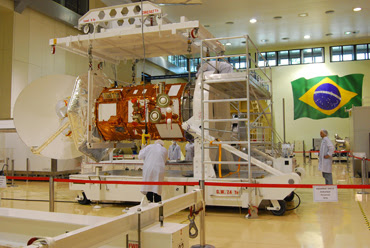 Aquarius/SAC-D Satellite being tested at LIT/INPE
Source: Website of the National Institute for Space Research (INPE)
Foreign news–English and Spanish