Argentina's Telecomm. Satellite is Qualified at the INPE

It follows a note published on the day (08/24) in the website of the National Institute for Space Research (INPE) informing that Argentina's Telecommunication Satellite is qualified at the INPE's Integration and Testing Laboratory.

The structural model of the next Argentine telecommunication satellite, the ARSAT-1, leave on August 22 the facilities of the Integration and Testing Laboratory (LIT) of the Brazilian National Institute for Space Research (Instituto Nacional de Pesquisas Espaciais - INPE) in São José dos Campos (SP), where it has been tested the latest eight months. It has been three years of preparations and negotiations between the LIT/INPE and ARSAT, Argentine state telecommunications company.

The campaign scored some records for LIT/ INPE: it was the first qualification of equipment for a telecommunications satellite. The ARSAT-1 was also the largest equipment in volume and mass - about three tons with fuel - already tested in Brazil.

In addition to continuing the longstanding cooperation between Brazil and Argentina in the space sector, the experience in the development of procedures, instrumentation and conducting the test campaign brought to LIT/INPE, and consequently for Brazil, a relevant experience for the future development of the Geostationary Satellite for Defense and Strategic Communications - SGDC. 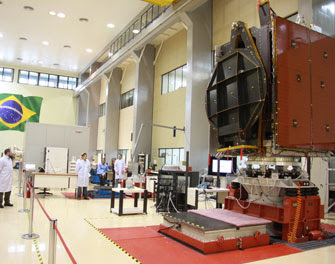