It follows one communicates published in english on the day (18/04), in the site "www.aviationweek.com", announcing that Ukraine and Brazil are preparing the Cyclone-4 Launch Vehicle.
Duda Falcão
Ukraine And Brazil Prepare
Cyclone-4 Launch
By Robert Wall
Apr 18, 2011
Photo Credit: Yuzhnoye 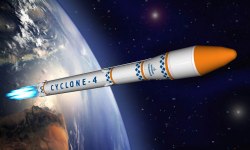 RIO DE JANEIRO - Launcher and pad preparations to boost the Ukraine-built Cyclone-4 from Brazil’s Alcantara launch center are entering their final phase, with the goal of completing the qualification liftoff next year.
Discussions between Ukraine and Brazil to jointly work on a Delta II-class launcher and launch site in northern Brazil date back to the 1990s and have been officially underway since 2003.
The three-stage launcher uses the Cyclone-2 (derived from the SS-9 intercontinental ballistic missile) as its first two stages, and features an all-new third stage that replaces the one used on Cyclone-3. The new third stage is due to complete integration testing soon, a program official says. It is designed to orbit 5,300-kg (11,700-lb.) single or multiple payloads into low Earth orbit or 1,600 kg into geosynchronous transfer orbit. The third stage features a new fairing, adapter and engine. It also has more propellant capacity than the Cyclone-3’s third stage.
Ukrainian officials will determine the payloads to be used in the qualification launch, with Japan’s Nano Jasmine, a university-built satellite, expected to be among them.
Meanwhile, preparations continue at Alcantara for the launch facilities. The site is near Sao Luis at around 2 deg. S. and 44 deg. W. and is being configured to handle up to six liftoffs per year.
Officials for Alcantara Cyclone Space, the venture selling the launch service, note that Cyclone-2 had a 100% success rate in 105 attempts from the Baikonur Cosmodrome in Kazakhstan (the Cyclone-3 had six failures in 120 launches; it was launched from the Plesetsk site in northern Russia).
Fonte: Site www.aviationweek.com