It follows one note published on the day (03/09) in the website of the National Institute for Space Research (INPE) noting that the recent geomagnetic storm was the strongest in eight years.

The solar ejection that began on Wednesday (3/8) reached Earth's magnetosphere on Thursday (3/8), causing the most intense geomagnetic storm since 2004. The Brazil’s National Institute for Space Research (Instituto Nacional de Pesquisas Espaciais - INPE) registered -147nT of DST index, which measures the level of disturbance on planet's magnetic field and classifies numbers below -100nT as intense geomagnetic storms.

"The Earth's magnetosphere takes about two days to recover itself from storms like this, but it will be getting more plasma in the coming days (March 10 and 11) due to a solar ejection registered today, which can intensify the storm," said Clezio De Nardin, researcher at EMBRACE/INPE.

Geomagnetic storms are caused by solar ejections emitting radiation and after reaching the Earth's magnetosphere might cause changes. They usually happens when the sun is approaching its maximum level of activity (solar maximum), which occurs in cycles of 11 years. Storms may cause technological problems, but offer no risk to human health.

The Program of Brazilian Space Weather Study and Monitoring (EMBRACE) assess the solar phenomena that affect the environment between Sun and Earth, and the space around Earth.

Solar phenomena are capable of causing interference in systems such as GPS, plus the ability to induce electric currents in transformers, power transmission lines and affect the protection of pipelines that transport oil and gas. These phenomena are particularly intense at the Brazil’s space environment due to the large size of the country, distributed to the north and south of the geomagnetic equator, to the maximum geomagnetic declination and to the South Atlantic Magnetic Anomaly.

Through studies on electrodynamics processes of the equatorial and low latitudes ionosphere, INPE's researchers monitor physical parameters such as Sun characteristics, interplanetary space, magnetosphere, ionosphere and the mesosphere. 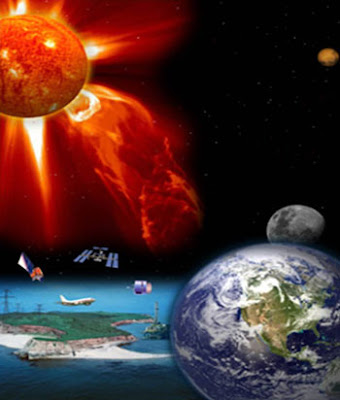