It follows a note published on the day (03/14) in the website of the National Institute for Space Research (INPE) noting that the INPE will return soon to Antarctica.

A team from the Brazil’s National Institute for Space Research (Instituto Nacional de Pesquisas Espaciais - INPE) will be at the Comandante Ferraz Station, in King George Island, Antarctica, next week, for the installation of solar panels and batteries in meteorological instrumentation that were not hit by the fire.

The team is coordinated by Héber Passos, technician at INPE, also composed by José Valentin Bagesto, Marcelo Santini (meteorologist) and the engineer André Barros, research fellows. The action might allow Brazil to keep running some activity until the rebuilt.

The group will also evaluate the condition of INPE’s modules and equipment, practically the only ones not affected by fire. Some instruments that measures ozone layer, gravity waves and other parameters of the high atmosphere will be moved to other areas of countries that cooperate with Brazil, such as the Chilean base “Presidente Eduardo Frei”, also in the King George Island, and Rio Grande city, in Terra do Fogo, Argentina, near Ushuaia (the southernmost city in the world).

INPE’s laboratories are placed near Ferraz Station but are not contiguous to other facilities, which have allowed researchers to avoid the fire inside them. Dubbed “Meteoro”, the weather module is next to “Ozônio” module, which has tools for studies of the layer surrounding Earth. There is also “Ionosfera”, which is placed about 300 meters from the station, and “Alta Atmosfera” module, situated about one kilometer away.

At the time of the accident, INPE’s experts José Roberto Chagas and José Valentin Bageston were at Ferraz preparing instrumentation to face the winter. There was no time to complete the maintenance and calibration of the sensors, nor protect the equipment, which are without power, hampering studies that require continuity. Hence the importance of this return to Antarctica.

Meteorological data have the longest historical series, with measures taken since summer of 1884-1985, and it is to continue this information that new equipment for power system will be sent to Antarctica.

INPE is a pioneer of the Brazilian Antarctic Program (Proantar) and promotes research aimed at understand Sun-Earth relations and connections of the icy continent with other parts of the world, also studding  ionosphere, atmosphere dynamics, ozone layer and ultraviolet radiation.

In addition to research in the station, INPE performs oceanographic studies and ocean-atmosphere interaction, supported by ships. Since January, the institute has been supporting the maintenance and data transfer from “Criosfera” module, installed in Antarctica, about 500km from the geographic South Pole. 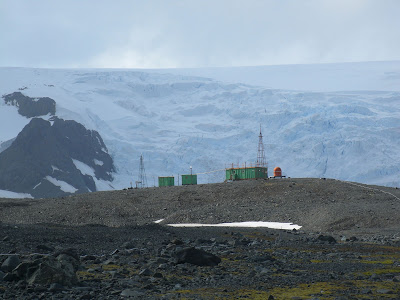 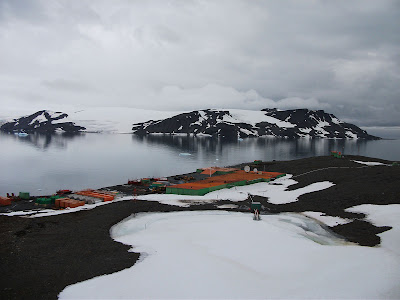 Overview of the Station. Ozônio and Meteoro
modules on the corner of the photo (right)

Ionosfera module (Station at the background)