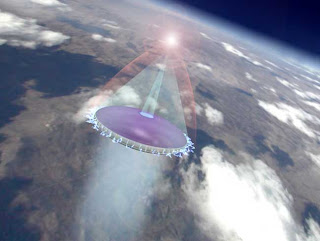 New laser propulsion experiments are throwing light on how to build future hypersonic aircraft and beam spacecraft into Earth orbit.

Indeed, a "Lightcraft revolution" could replace today's commercial jet travel. Passengers would be whisked from one side of the planet to the other in less than an hour - just enough time to get those impenetrable bags of peanuts open. Furthermore, beamed energy propulsion can make flight to orbit easy, instead of tenuous and dangerous.

For the past three decades, Myrabo's burning desire has been to create and demonstrate viable concepts for non-chemical propulsion of future flight vehicles through his research and company Lightcraft Technologies, Inc., of Bennington, Vt.

"Typically, a new propulsion technology takes 25 years to mature...to the point where you can actually field it. Well, that time is now," Myrabo told SPACE.com.

The brightest new news in beamed energy propulsion is that experiments are now underway at the Henry T. Nagamatsu Laboratory of Hypersonics and Aerothermodynamics at the IEAv-CTA in Sao Jose dos Campos, Brazil.

The work is being sponsored under international collaboration between the United States Air Force Office of Scientific Research and the Brazilian Air Force.

"In the lab we're doing full-size engine segment tests for vehicles that will revolutionize access to space," Myrabo emphasized. "It's real hardware. It's real physics. We're getting real data...and it's not paper studies."

"Right now, we're chasing the data," Myrabo said. "When you fire into the engine, it's a real wallop. It sounds like a shotgun going off inside the lab. It's really loud."

The laser propulsion experiments, Myrabo added, are also relevant to launching nanosatellites (weighing 1 to 10 kilograms) and microsatellites (10 to 100 kilograms) into low Earth orbit.

Creating and flying Myrabo's "highways of light" has been a methodical and step by step undertaking.

Back in 1996 through 1999, he flew Lightcraft prototypes via a 10 kilowatt high-power infrared laser at White Sands Missile Range in New Mexico. In 2000 - sponsored under a grant to his company - he established a new world altitude record of over 230 feet (71 meters) for laser-boosted vehicles in free fight.

"The physics of high-power beamed energy propagation through the atmosphere...there's not a lot of expertise out there to make this stuff real. It's completely out of the conventional box," Myrabo said. "I've been working on it for 30 years. I know how to do it."

For decades, Myrabo said, what laser propulsion physicists have been hungry to achieve is a couple of dollars per watt of laser energy. "We're here now. It's a matter of will and do we want to do it. This technology is now at the cusp of commercial reality."

Leonard David has been reporting on the space industry for more than four decades. He is past editor-in-chief of the National Space Society's Ad Astra and Space World magazines and has written for SPACE.com since 1999.
Vejam a notícia no site da SPACE.com: http://www.space.com/businesstechnology/090729-tw-laser-lightcraft.html 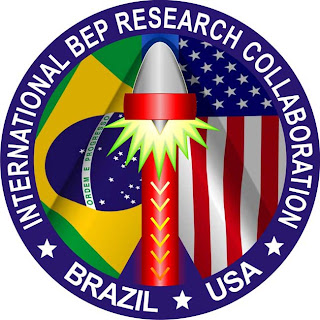