After 2 Years, Aerosols from Burnings Increase in Amazonia


The emission of aerosols, the soot particles from burning settled on the atmosphere, has increased significantly in Amazonia over the past two years (2008/2009). The statement is from the Air Quality Research group, CPTEC/INPE.
The burnings emit aerosols, biomass burning products, with higher incidence in the months of August and September. The CPTEC’s researcher, Saulo Freitas explained that emissions from burning of the central and northern part of Portugal in this period have migrated to the west and northwest of the Amazonia, through the wind. In these areas, which probably have been experiencing a dry period, the aerosols may have helped to intensify the drought, as these particles in the atmosphere tend to block the clouds formation.
Recent and preliminary studies have pointed the possibility of aerosols assume an important role in the climate of the Amazonas regions, when stimulating the rainfall. According to Freitas, the topic still new begins to attract foreign and national research groups, who have just started surveys on the alliance between aerosols and the climate of the region.
The aerosols gauge makes part of the health service interest that has been using it as an indicator of public policies. The biggest concentration of these particles in the atmosphere affects directly the health of the people in those areas, increasing the incidence of respiratory diseases.
The aerosols concentration is gotten indirectly, using data from the MODIS sensor data, the Terra and Aqua satellites, NASA, that enables the computation of the variation between solar radiation that occur on the layers of aerosols on the atmosphere and to those, that reach the surface. The measurement is based on the Aerosol Optical Thickness), whose values are directly related to the amount of particles in the atmosphere. Normal values in the Amazon are smaller than 0.1. During the firing, peaks above 1 can be observed. 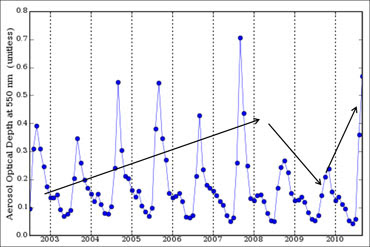