Below you can read the news "Space Force buyers make recruiting pitch to tech companies", published on Spacenews's website, in 09/30/2020. 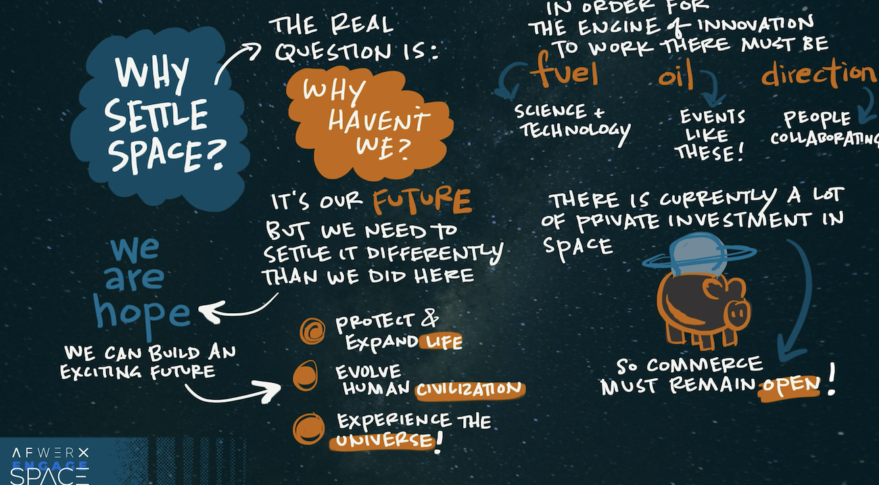 Credit: AFWERX EngageSpace
The Air Force Research Laboratory Space Vehicles Directorate is looking for companies with which to partner.
WASHINGTON — The Pentagon contracting process can be a major deterrent to tech companies interested in selling products to the military. The U.S. Space Force is aware of that problem and is trying to incentivize suppliers that are developing cutting-edge technologies, officials said Sept. 29 during a virtual conference organized by the U.S. Air Force.
“The space renaissance happening on the commercial side is fantastic, there is innovation we can use,” Col. Eric Felt, director of the Air Force Research Laboratory Space Vehicles Directorate  said at the AFWERX “EngageSpace” event.
AFWERX, an Air Force program created to attract commercial companies to the defense market, picked 172 space companies from more than 800 that competed for the opportunity to connect virtually with potential government buyers over the two-day conference.
The AFRL Space Vehicles Directorate is looking for companies with which to partner, Felt said. “We have limited funding in our budget for science and technology .. We have to leverage dual-use technologies. ” The Space Vehicles Directorate serves as the research and development arm of the U.S. Space Force.
Felt said companies can apply for CRADA’s — cooperative research and development agreements — that give them access to government facilities and mentoring in exchange for sharing their technology with AFRL. “We have test facilities, experts, capabilities we can provide if you want to bring your technology,” he said. “We can do testing and evaluation, and give you advice on how to mature your technology.
”CRADAs have been signed with companies that develop solar panels for satellites, for example, and data analytics firms that are working with AFRL develop a hybrid architecture of remote sensing imagery.
“The government is super slow,” said Felt. But he noted there are benefits to being involved with AFRL and with the Space Force’s Space and Missile Systems Center because these are the organizations that set standards for the space systems that DoD will buy.
“We lead effort to establish interoperability standards, to accelerate commoditization,” said Felt. Most recently, AFRL and SMC developed technical standards for optical communications equipment to be used to connect satellites in space. “We don’t want everybody having their own standards,” said Felt.
AFRL also created a repository of space data collected by companies that operate their own sensors. The “unified data library” is to help companies format their data so it’s compatible with government software applications.
“Yes, the government has cumbersome contracting, and we’re getting after that,” said Felt. The Space Enterprise Consortium run by SMC moves contracts much faster than traditional programs, he said. The consortium awards contracts for prototypes and those companies selected to build prototypes have the inside track if SMC decides to buy it in quantities.
“If you compete a prototype from SpEC you go straight to production without competing the prototype,” said Felt. An example is the AFRL-funded navigation satellite NTS-3. The satellite is an experiment but if SMC chooses to buy it can use the same contract to go directly to production.
Felt said companies find it difficult in the defense market to talk directly to customers and to the actual users of products. AFRL helps with the “customer discovery process,” he said. “We let companies interview customers to discover what they like and don’t like. We can provide access to the operators and program offices.
”Col. Russell Teehan, SMC’s portfolio architect, said Space Force leaders are open to hearing ideas from companies on how their products and services could be acquired differently than the traditional methods.
Space Force buyers may not know how to procure nontraditional technology, or may not have thought of a different way of providing a capability, said Teehan. “Companies have to tell us,” he said Teehan’s advice: “Don’t take the government literally. There may be a different concept of operations. You can help us transition to a different contract vehicle. You can get the Space Force to do things differently.”