Eight countries sign Artemis Accords: does this situation represent the beginning of an "UN Moonexit"?

Below you can read the news "Eight countries sign Artemis Accords", published on Space News' website, in 10/13/2020.

Seven countries (Australia, Canada, Japan, Luxembourg, Italy, the United Arab Emirates and the United Kingdom) have joined the United States in signing the Artemis Accords, a set of principles governing norms of behavior for those who want to participate in the Artemis lunar exploration program.

This is an epic and emblematic moment for space exploration but, on the other hand, a challenging situation for an international United Nations agreement on this theme, such as the UN Moon Treaty.

In particular for Australia, this is a curious and uncommon situation considering the Aussies are a party country of UN Moon Treaty and now are, simultaneously, member of Artemis Accords.

Given this peculiar situation, the big objective questions now are: How will Australia legally deal with this situation as an original State party to the Moon Treaty? How will this double registration be attended without conflicts? Will Australia abandon the UN treaty?

To be more acid, does this situation represent the beginning of a (an UN) "Moonexit"?

Many others questions could be made, but no answer can be easily done now, for sure.

Let's give time to time. 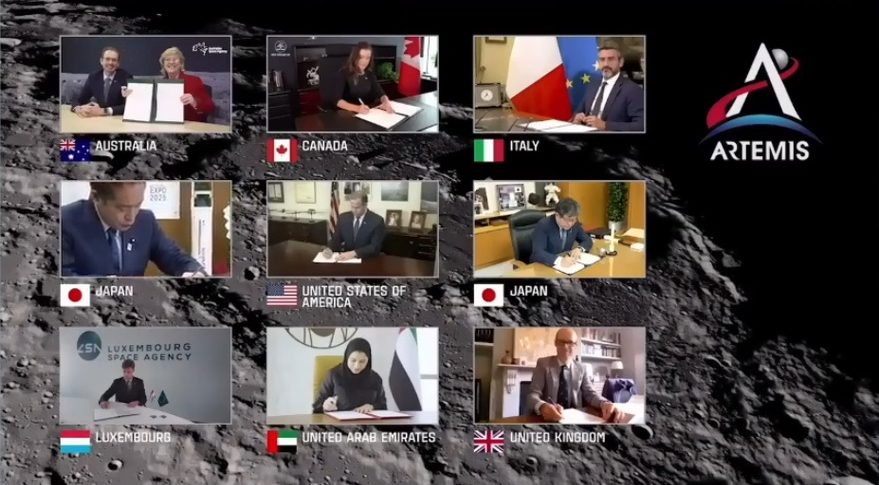 Representatives of the United States and seven other nations formally signed the Artemis Accords during a virtual ceremony at the International Astronautical Congress Oct. 13. (Credit: NASA TV)
WASHINGTON — Seven countries have joined the United States in signing the Artemis Accords, a set of principles governing norms of behavior for those who want to participate in the Artemis lunar exploration program.
During a session of the International Astronautical Congress Oct. 13, NASA announced that Australia, Canada, Japan, Luxembourg, Italy, the United Arab Emirates and the United Kingdom had joined the United States as being the first to sign the accords, which NASA announced in May. Representatives of all eight nations signed the documents in a virtual ceremony.
“Fundamentally, the accords are about avoiding conflict, transparency, public registration, deconflicting activities,” NASA Administrator Jim Bridenstine said at the ceremony. “These are the principles that will preserve peace.
”The accords, seven pages long, outline a series of principles that countries participating in the Artemis program are expected to adhere to, from interoperability and release of scientific data to use of space resources and preserving space heritage. Many of the principles stem directly from the Outer Space Treaty and related treaties.
“The demand to be part of the Artemis program was quite overwhelming,” Bridenstine said in a call with reporters. “We thought this would be a really good opportunity to create the rules by which all nations will participate in the Artemis program. Basically, the Artemis program would be a forcing function to adhere with the Outer Space Treaty.”
Since announcing the Artemis Accords in May, NASA, in cooperation with the State Department, has been in discussions with these seven countries and others. While NASA did not publish the original version of the accords, the version released now is “substantially improved from the feedback that we got from the international partners,” said Mike Gold, acting associate administrator for international and interagency affairs at NASA.
One example he cited of such changes is the scope of the accords themselves. NASA was originally focused on having the document apply to lunar and later Martian exploration. Japan, he said, wanted to include asteroid and comet missions as well, based on that country’s program of robotic asteroid missions like the Hayabusa2 asteroids sample return spacecraft. The document now includes asteroid and comet missions, as well as activities in orbit around the moon and Mars and the Lagrange points of the Earth-moon system.
NASA is implementing the Artemis Accords as a series of bilateral agreements between the United States and other countries, which Bridenstine said allows them to move more quickly than if NASA sought a multilateral agreement under the aegis of the United Nations. “If we turned to an international body and had them assemble all the nations of the world and then start moving forward, it would take a very, very long time,” he said. “We have a mandate to go quickly and, at the same time, bring on international and commercial partners.
”Other space law experts agree that the use of bilateral agreements makes sense for the Artemis Accords. “What we have with the Artemis Accords is, in my view, a continuum of what we’ve been looking at in space law,” said Ken Hodgkins, a former State Department official, during a Sept. 30 panel discussion about the accords organized by the space law program at the University of Nebraska. The accords, he said, are “a practical exercise of setting the ground rules for what are the basic values we all want to pursue being beyond low Earth orbit.”
Frans von der Dunk, a professor of space law at the University of Nebraska, drew parallels with development of international civil aviation regulations, which started with bilateral agreements between the United States and United Kingdom that were later copied among other nations. “That is something that will possibly happen here as well,” he said.
The seven countries signing on the Artemis Accords now are just the first to get through the negotiation process with the United States. Some of them, including Australia, Italy and Japan, have already signed agreements with NASA about cooperation on Artemis, while Canada previously announced plans to contribute to NASA’s lunar Gateway.
“Now that the text of the accords has been finalized, we have the opportunity to broaden the coalition to any number of nations that can participate in the Artemis program and will abide by the principles of the accords,” Gold said. Additional countries could sign on as soon as later this year.
The bilateral nature of the accords, though, do present restrictions. Asked if China could sign on, Bridenstine noted that NASA, under the so-called “Wolf Amendment” in federal law, is restricted from bilateral cooperation with China. “NASA, as an agency, will always follow the law, and law right now prohibits us from engaging China on bilateral activities,” he said. That law could change, “but at this point it’s just not in the cards.”
Other countries may choose not to sign the accords. “Not every nation supports those ideals” of freedom and private enterprise, said Keith Krach, Under Secretary of State for Economic Growth, Energy, and the Environment, at the signing ceremony, “so those who do must stick together.”
“While a good number of countries signed the Artemis Accords today, there is room for more, and we look forward to working with all of our international partners,” Bridenstine said.