Below you can read the news "Inside Sierra Nevada Corp's space plans, from the reusable 'Dream Chaser' to inflatable habitats", published on CNBC's website, in 10/11/2020. 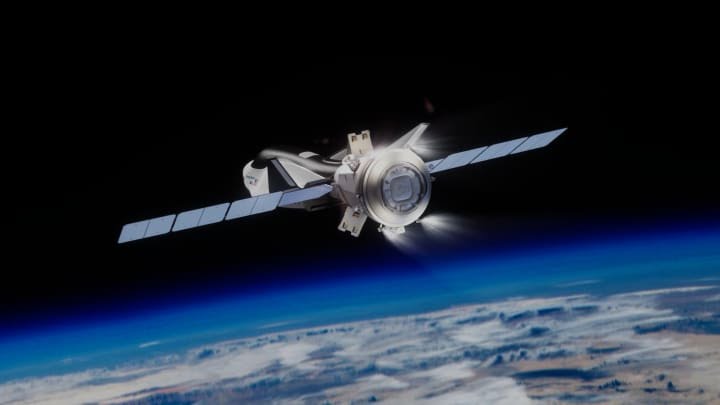 An animation shows Dream Chaser and its Shooting Star cargo module in orbit around the Earth.
(Source: Sierra Nevada Corporation)
Sierra Nevada Corporation is best known as a private aerospace and national security contractor – but the company is investing heavily in its space systems division, especially as it sees NASA and other companies building infrastructure in orbit.
"Our view of the future is a vibrant, commercial low Earth orbit economy," Steve Lindsey, SNC's senior vice president of strategy space systems, told CNBC. "We want to be the logistics and crew providers in that future, so we're really playing the long game.
"While SNC to date has been involved in hundreds of exploration missions and more, the crown jewel of its space portfolio is Dream Chaser: A reusable spacecraft that, in appearance resembling a miniaturized NASA Space Shuttle, is built to launch atop a traditional rocket and land on a runway like an airplane.
"We view the Dream Chaser as something that eventually in low Earth orbit will be providing transportation, logistics and crew for everybody," Lindsey said.

Dream Chaser gets ready to launch 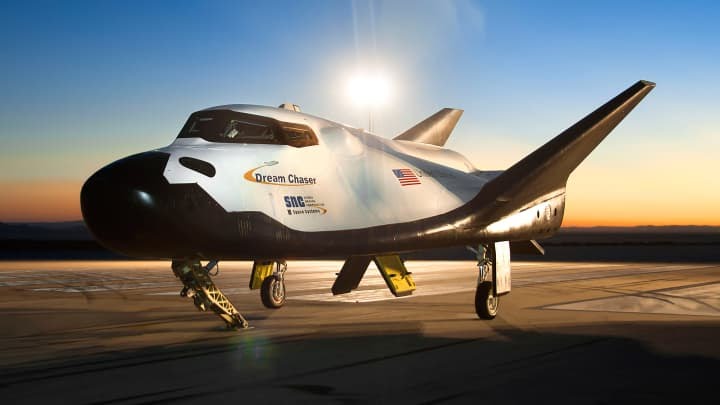 Sierra Nevada Corporation's Dream Chaser. (Source: NASA)
In the coming year or so ahead, SNC is focused on Dream Chaser's first launch. The vehicle SNC is building now is optimized to carry cargo, rather than crew, and is under contract to fly supplies and research to the International Space Station for NASA.
Lindsey has been working on SNC's Dream Chaser program for nearly a decade. While SNC had won more than $360 million in development contracts from NASA under the competitive Commercial Crew program, the agency in 2014 ended up going with SpaceX and Boeing for further contract awards. Despite the setback in developing a Dream Chaser as a crew vehicle, SNC pivoted to focus the spacecraft on winning contracts under NASA's second generation of Commercial Resupply Services program.
But SNC is building Dream Chaser to go far beyond the upcoming cargo missions.
"We see it as the future vehicle that will be flying for the next 30, 40 or more years," Lindsey said. 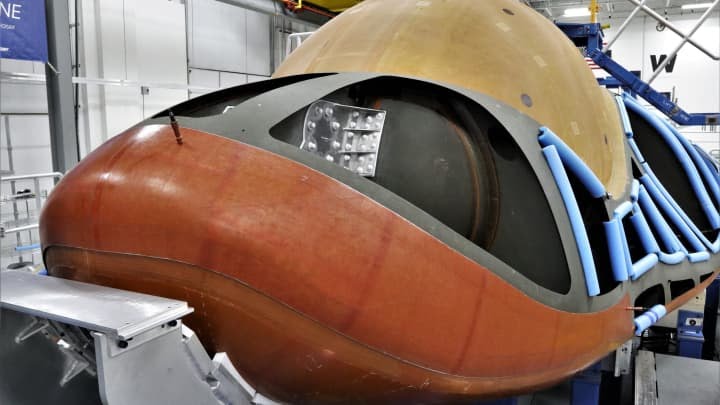 Installing Dream Chaser's aeroshell in August 2020. (Source: Sierra Nevada Corporation)
The company earlier this year announced the first Dream Chaser is named "Tenacity," which Lindsey said feels fitting amidst the challenges brought on by the COVID-19 pandemic.
"2020 has been somewhat difficult year for all of us, but we're working through the challenges ... and coming up with different ways of doing things to keep us on track," Lindsey said. 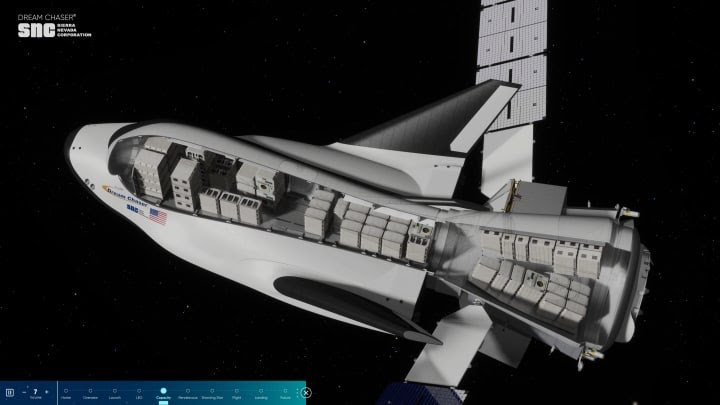 An animation shows a cross-section rendering of the room for cargo on Dream Chaser and its Shooting Star module.
(Source: Sierra Nevada Corporation)
SNC has been able to stay on schedule manufacturing the first Dream Chaser spacecraft, he noted, with the company running multiple shifts a day. SNC is building both Dream Chaser, which can carry 4,080 pounds of supplies, and the "Shooting Star" cargo that goes with it, which can carry an additional 11,000 pounds of cargo. One of the major assembly steps upcoming is to install the wings on Dream Chaser, which Lindsey expects will happen early next year. 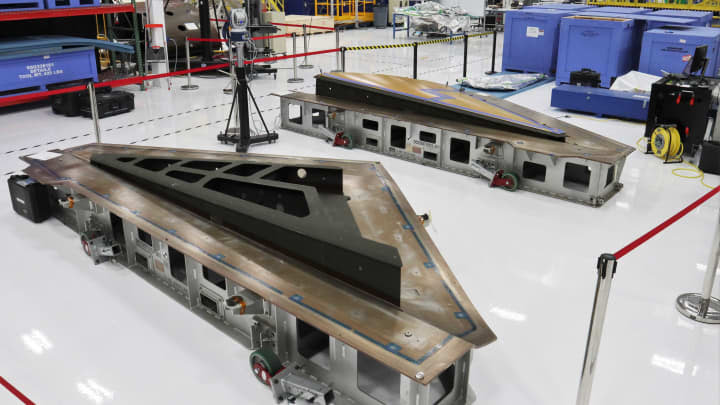 Both of the Dream Chaser wings. (Source: Sierra Nevada Corporation)
Once Dream Chaser and Shooting Star are built, then SNC will move to acceptance testing. That's where SNC will bend and push the limits of the spacecraft's structure, to replicate the intense physical pressures of launching and reentering through the atmosphere. Next, SNC will take both spacecraft to Plum Brook Station, a facility at NASA's Glenn Research Center in Ohio. There the vehicle will be put in a thermal vacuum chamber and undergo testing that simulates the environment of space, including vibration and acoustic testing. 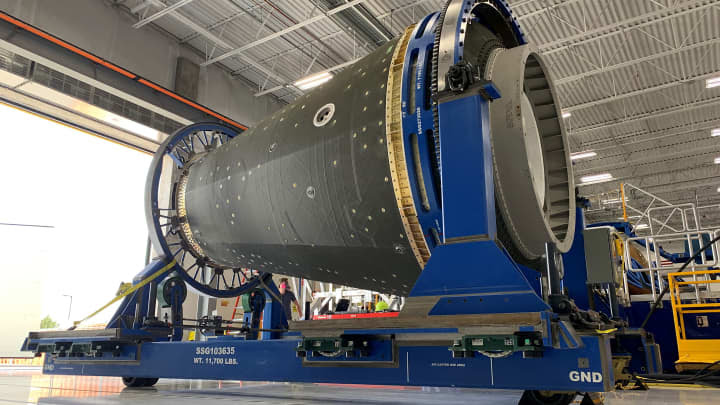 The Shooting Star cargo module for Dream Chaser. (Source: Sierra Nevada Corporation)
rom Plum Brook, Lindsey said SNC will send the two spacecraft to NASA's Kennedy Space Center in Florida, where it will go through final tests and processing before launch.
SNC has proven "that the Dream Chaser structure is certified for at least 15 missions," Lindsey said. That's key to the company's heavy investment in the spacecraft, as reuse will help reduce its costs. Additionally, Lindsey noted that SNC is looking to also certify its thermal protection system for 15 missions. This part of the spacecraft consists of about 2,000 tiles that protect the spacecraft during re-entry into the atmosphere, when temperatures can reach more than 3,000 degrees Fahrenheit. Lindsey, who flew five Space Shuttle missions himself, noted that the Dream Chaser tiles "are much tougher than" the ones on NASA's previous spacecraft. Dream Chaser's environmental control system will then help keep the temperature down to what Lindsey described as a "shirtsleeves" level, important for flying sensitive cargo as well as people.
Dream Chaser also doesn't have any toxic propellants on board. While some spacecraft use what are known as hypergolic propellants, which Lindsey said would have been easier, the company avoided it "because we want to be able to land anywhere in the world that a 737 aircraft can and process the vehicle without any special equipment." 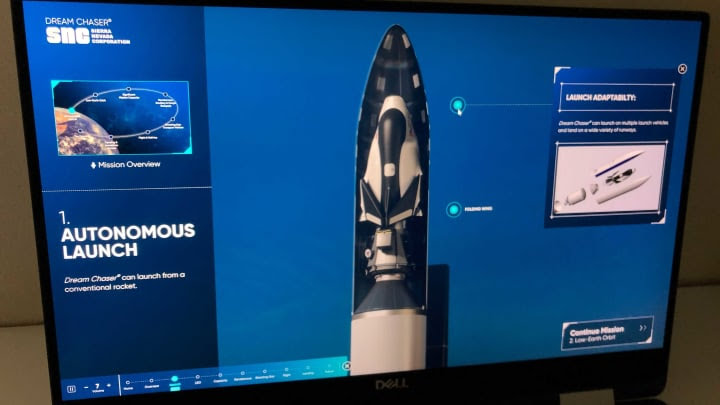 The interactive app the company built to show case Dream Chaser and its capabilities. (CNBC | Michael Sheetz)
The crew version of Dream Chaser is designed to fly up to five astronauts. SNC aims to make Dream Chaser price competitive with others in the market, with Lindsey saying that his company wants "to be down closer to what what SpaceX is targeting." NASA expects SpaceX's Crew Dragon capsule will cost about $55 million per person.
"What's really interesting is that a lot of the pricing really depends on the price of the rocket," Lindsey said. "Our costs, operating Dream Chaser by itself, are not that high. So what we're excited to see is all the things that are happening [in the industry] – every single major launch company is building new rockets to be more price competitive. That's one of the things that's required for the low Earth orbit economy to take off, is those rocket prices drop.
"Currently United Launch Alliance, the joint venture of Boeing and Lockheed Martin, is Dream Chaser's launch provider. SNC signs a six mission deal with ULA to fly on the coming Vulcan rocket, with the first mission scheduled for next year.
"Our goal here is to get this vehicle to flight as soon as we possibly can, but we also have to do it safely," Lindsey said.
SNC couldn't yet speak more specifically to when launch day is scheduled, with Lindsey noting that the timing is "a negotiation between us and NASA.
" But the agency's leadership last week stopped by SNC's facilities in Louisville, Colorado, where they also go to see Dream Chaser on the production floor.
That Dream Chaser may be built for cargo, but 85% of its parts are the same as the crew variation – with the structure also certified for crew.
"We have never lost track of [flying astronauts]," Lindsey said. "Our intention is to go to crew eventually."

The space industry is becoming increasingly important to life on Earth, a fact noted by Lindsey. He described the industry as critical to SNC's future, in many ways mirroring the language used by Bank of America recently to describe why it expects the space economy will become a $1.4 trillion market by the end of the decade.
"We are building a logistics train to low Earth orbit," Lindsey said.
SNC's working on a piece of the infrastructure for people to live and work in space: An inflatable habitat, which the company's been developing under a NASA contract for several years. SNC's habitat design has three floors but, because it's inflatable, it could be launched on a conventional rocket. The habitat has a variety of applications, Lindsey noted, such as a station in orbit or a base on the surface of the Moon. The company's recent testing has also found the inflatable structure to be even stronger than expected.
"We just completed testing with a third scale model and we had to end the testing because we couldn't break it," Lindsey said.
Inflatable habitats have been looked at by other companies, due to the advantage of launching in a smaller form factor and then expanding to a larger volume once in space. Bigelow Aerospace is well known for its development of inflatable habitats, having connected its BEAM module to the International Space Station in 2016. But Bigelow Aerospace had not launched one of its planned full size habitats before the company reportedly closed operations earlier this year. 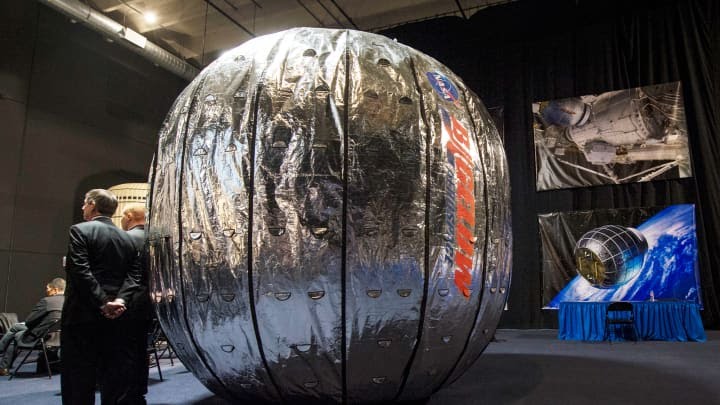 The Bigelow Expandable Activity Module (BEAM) on display during a media briefing at which NASA Deputy Administrator Lori Garver and Bigelow Aerospace founder Robert Bigelow announced that BEAM will join the International Space Station to test expandable space habitat technology. (Source: Getty Images)
Lindsey noted that SNC's structure and method is different than what Bigelow Aerospace was, but the two companies had worked together – as SNC built the mechanism that connected BEAM to the ISS.
In addition to the inflatable habitat, Lindsey has an advanced development group at SNC that he said "is looking at derivative Dream Chaser technologies and applying them in other areas." That team came up with a proposal for an orbital outpost that uses the Shooting Star cargo module – which SNC in July won a contract for from the Pentagon's Defense Innovation Unit.
"Imagine a large, very capable satellite with a huge amount of power, that could optionally be crewed or uncrewed," Lindsey said.

The SNC VP put it simply: "We are heavily involved in pretty much everything that NASA is doing in exploration." With the U.S. space agency largely focused on further exploration of the Moon, SNC is a part of three NASA efforts: The Human Landing Systems (HLS) program, the lunar Gateway, and the Commercial Lunar Payload Services (CLPS) program. 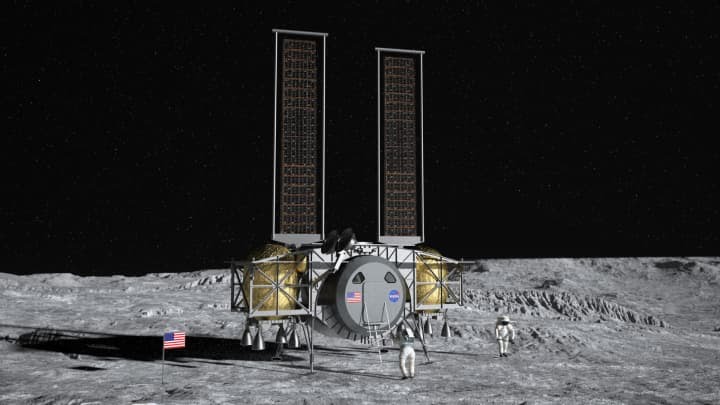 An artist's rendition of Dynetics' HLS lander on the Moon's surface. (Source: Dynetics)
The HLS program is the largest near-term opportunity, with NASA looking to invest heavily in at least one of the three teams competing to build a lunar lander that can carry astronauts to-and-from the surface of the Moon. SNC is a part of the HLS team led by Dynetics – a space company owned by defense contractor Leidos – which is competing with Elon Musk's SpaceX and Jeff Bezos' Blue Origin. The three teams won a combined $967 million earlier this year, with even more lucrative awards expected in February after a 10 month design study period.
"We're also involved in, believe it or not, building a lunar rover with several entities," Lindsey said. "While there hasn't been a request for proposals ... NASA is looking at an unpressurized rover that would actually carry people on the lunar surface – kind of an Apollo on steroids.
"Additionally, Lindsey noted that Japan's space agency recently partnered with NASA to provide a pressurized lunar rover – another proposal SNC is involved in."We are working through some partnerships right now on these two major rovers," Lindsey said. "We can't really talk too much about teammates but ... we're going to go pursue that opportunity.
"Finally, SNC is also considering using its Shooting Star cargo module as a pressurized spacecraft that would carry astronauts from Earth's orbit to the Moon.
"We can go up with Dream Chaser, easily transfer crew into a free flying cargo module and use that to transport people," Lindsey said.
The Dream Chaser spacecraft is at the core of SNC's vision for infrastructure in space – with the company aiming to be a part of many of the areas that industry analysts expect will grow quickly in the next decade.