Here is a note published day (01/11) in the "Parabolic Arc" site, noting that an agreement was signed by Brazil and Germany as part of the project of the Microsatellite Launch Vehicle 1 (VLM-1 the acronym in Portuguese.). 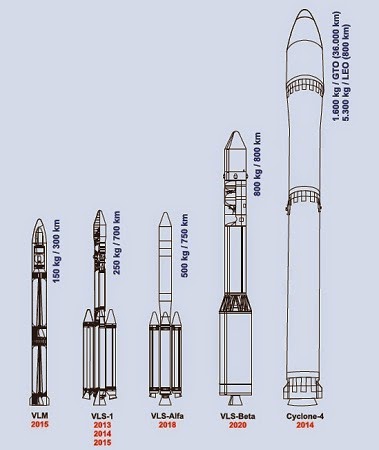 São José dos Campos, Brazil (IAE PR) -- The project for development of Microsatellite Launch Vehicle  (VLM) Brazilian took an important step in recent weeks, with the signing of the agreement between the FUNCATE (Science Foundation, Applications and Space Technology) and the IAE/DCTA (Institute of Aeronautics and Space ).

The VLM-1, the result of a partnership between the IAE/DCTA and the German Space Agency (DLR), aims to develop a rocket for the launch of space payloads or microsatellites (150 kg) in equatorial and polar orbits or re-entry, with three stages of solid rocket motors in its basic configuration: two stages with the S50 engine with about 12 tons of propellant and an orbital stage with the S44 engine.

Other vehicle configurations may employ a third stage in most solid propellant or liquid propellant.The VLM must meet an important and growing demand for the release of CubeSats and microsatellites.  This agreement is valid for four years and establishes a long-term partnership between FUNCATE and the DCTA/IAE.