It follows one article published in the day (04/15), in the website "www.spaceflight101.com", noting that Stalling Tsiklon-4 Project from Alcantara faces ultimate failure. 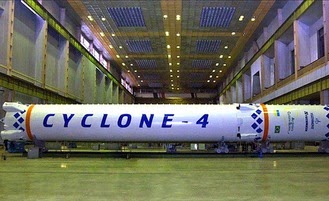 A number of reports emerged in recent weeks indicating that the Tsiklon-4 launch vehicle program jointly operated by Brazil and the Ukraine is being abandoned after a ten-year history filled with funding issues and technical challenges. The project aimed to establish a launch base in Brazil from where Ukrainian-built Tsiklon-4 launch vehicles could be launched to compete on the commercial launch market.

The bi-national project was initiated back in 2003 when Brazil and the Ukraine signed an agreement on the use of the Tsiklon-4 (Cyclone-4) launch vehicle from the Alcântara Space Center with Brazil providing the launch site territory and ground systems architecture and Ukraine developing and manufacturing the launch vehicle. Initially, launches were envisioned to begin in 2006, but it quickly became clear that the establishment of the project needed more time. Alcântara Cyclone Space, a bi-national company, was formed in 2006 with the first launch expected a few years down the road.

Design and development work on the Tsiklon-4 rocket was completed by the Yuzhnoye Design Bureau in the Ukraine with manufacturing of the rocket completed by Yuzhmash, a pairing of companies that had been in place for decades for a variety of projects such as Dnepr, Zenit, Tsiklon-2 & 3 and more recently Antares.

Tsiklon-4 is largely based on the Tsiklon-3 that itself uses heritage of the Tsiklon-2 rocket that first flew in 1967 and made over 120 flights with a good success rate. The Tsiklon-3 rocket flew over 120 times between 1977 and 2009 when the Tsiklon project was retired from Russian Cosmodromes.

The Tsiklon-4 design largely builds on the Tsiklon-3 using an identical first and second stage, but modified third stage with improved engine and larger propellant tanks. Other changes include the use of a much bigger payload fairing to fit large satellites, and the introduction of modern flight control systems. 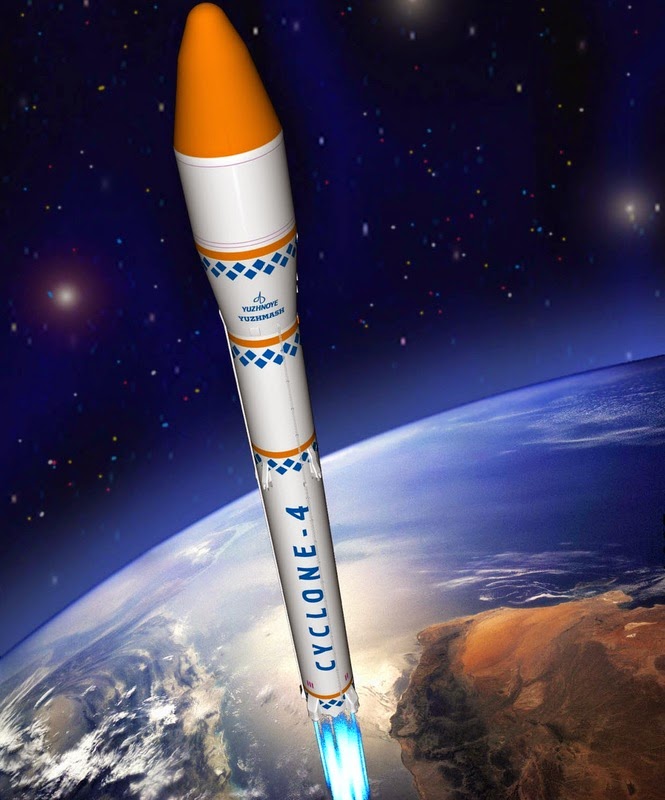 Overall, the three-stage Tsiklon-4 rocket would stand 40 meters tall with a total launch mass around 220 metric tons, using Unsymmetrical Dimethylhydrazine and Nitrogen Tetroxide propellants on all stages. The first and second stage are three meters in diameter while the third stage is widened to a diameter of 3.98 meters. Powered by three two-chamber RD-261 engines and a four-chamber RD-855 vernier engine for steering, Tsiklon-4 would have a total launch thrust of around 295 metric ton-force.

After a burn of two minutes, the first stage would hand over to the single 976kN two-chamber RD-262 engine and four-chamber RD-856 vernier engine of the second stage that burn for a little over two and a half minutes. The third stage of Tsiklon-4 is based on heritage components, but uses a wider diameter to create larger propellant tanks and it employs a vastly improved RD-861K engine that delivers 77.4 Kilonewtons of thrust and provides re-start capability for a total burn time of nearly 11 minutes.

Launching from Alcantara, Tsiklon-4 was expected to be able to deliver 5,700 Kilograms into a circular equatorial orbit at 200 Kilometers, 3,900kg into a Sun Synchronous Orbit and 1,600kg into a Geostationary Transfer Orbit.

But developing the launch vehicle was only half the task to be accomplished by Alcântara Cyclone Space, the establishment of a launch base being equally complex and financially demanding.

The site is located on Brazil’s northern Atlantic Coast, making the Alcântara Launch Center (ALC) the closest launch base to the equator which provides a significant advantage in launching Geostationary Satellites, an advantage also used by the Guiana Space Center that is located further north of the equator. ALC started construction in 1982 and to date, only sounding rockets and VLS-1 rockets were launched from there. In addition to plans of launching Tsiklon-4 from ALC, there had also been considerations of launching Israeli Shavit and Russian Proton or Angara rockets from the center. 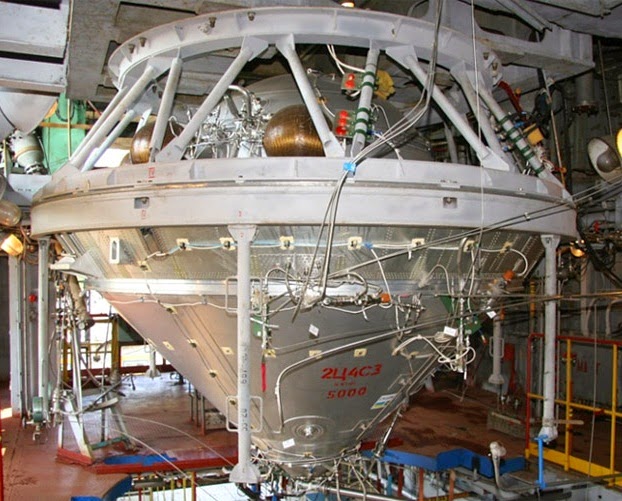 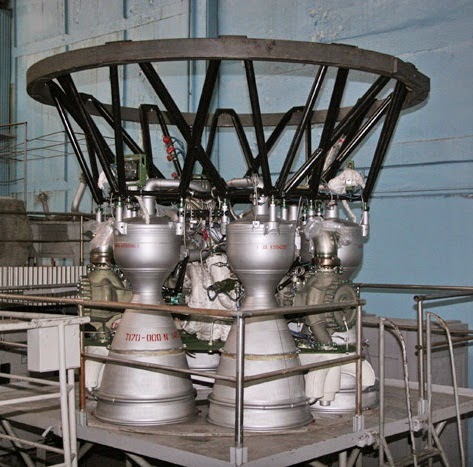 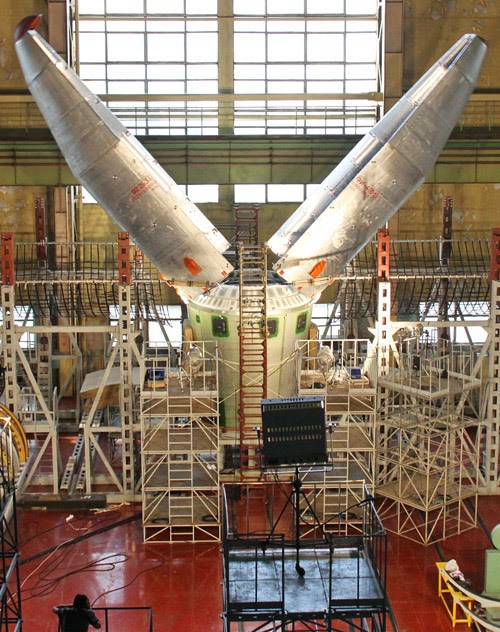 Construction of the Tsiklon-4 facility commenced in September 2010 under Brazilian funding and control with construction to a point where Ukrainian-built Ground Support Equipment could be installed. In 2010, the first launch of Tsiklon-4 was promised for February 2012 – already a six year slip over the initial goal of launching in 2006 that was set in 2003.

By early 2011, reports emerged of the Ukrainian side hitting funding difficulties, despite claims of political support behind the program. In April 2011, Russian news outlets published reports indicating that the Alcantara Tsiklon-4 launch site would not become operational before 2014, however, visible progress was made by early 2012 when photos of the construction site at ALC were published and initial ground support systems such as the Transporter-Erector of the rocket underwent full-scale testing. Mid-2012, reports were published indicating that the workforce at Alcantara was cut in half and the operators of the site left contractor bills open leading to a two-week strike.

A second batch of Ground Support Equipment was shipped from the Ukraine to Brazil in May 2013 for installation on the launch pad to start the deployment of mechanical support systems for the rocket as well as propellant handling systems. Around the same time frame, Ukrainian officials called on Brazil to keep up its end of the deal and provide the necessary funding for the completion of the construction of the launch site. Layoffs at the Alcantara Cyclone Space company continued in 2013 and Brazilian news agencies reported the construction site was mostly abandoned with no more progress to be seen.

Small financial relief was provided in the second half of 2013 from the Brazilian government, but that was only sufficient to essentially keep the lights on at Alcantara. Despite being in serious trouble, the Alcantara Cyclone Space company continued to claim that the first launch of Tsiklon-4 would take place in 2015.

By the end of 2013, the first Tsiklon-4 launcher was about 80% complete at the Yuzhmash plant with testing also showing good results, however, the launch site was only halfway to completion.

In January 2014, ALC signed a contract with the Von Karman Institute of Belgium for the launch of the QB50 project consisting of 50 two-unit CubeSats to be deployed to a Low Earth Orbit. The goal of QB50 is to demonstrate that a wealth of CubeSats can be launched by a low-cost launch vehicle to establish a constellation of scientific spacecraft in Low Earth Orbit enabling thermospheric science. The project will demonstrate the harmonization and coordination between many participating institutions and also establish an unprecedented scientific satellite constellation for in-situ measurements within the thermosphere, a zone that is hardly accessed by any other spacecraft for dedicated measurements.

In 2014, it was announced that events in the Ukraine had no immediate impact on development and manufacturing operations ongoing at Yuzhmash, but long-term effects of a conflict between Russia and the Ukraine may have an effect on the availability of the RD-261 and 262 engines. By early 2015, work had apparently come to a stop in the Ukraine and Brazilian sources also started reporting that the project was ultimately headed for failure.

A field report from the Alcantara Space Center showed that all work had ended and the site was abandoned. Reports from numerous sources confirmed in late March and April that the project had been stopped. Brazil had apparently already decided in January to end its involvement in the Tsiklon-4 project.

It remains to be seen whether the half-finished launch facility will eventually find a user and whether the Tsiklon-4 rocket will find its way to a launch pad in the coming years. The QB50 project has already started looking into launch opportunities on other vehicles to find an affordable launch slot in the next few years. 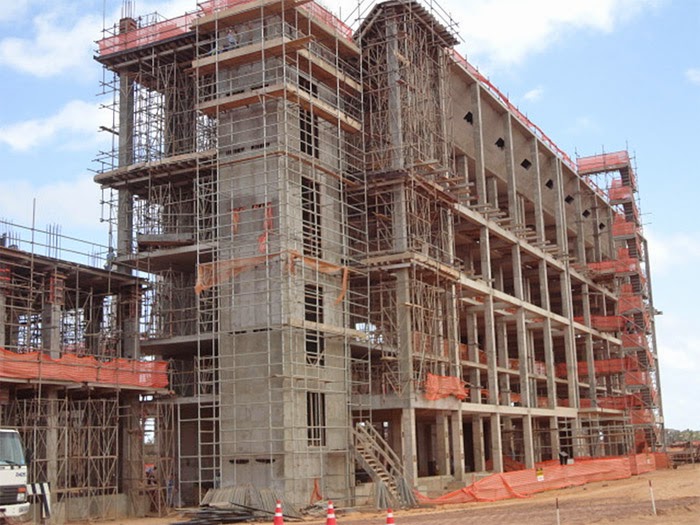