It follows a note published on the day (10/04), in the website of the "Cosmos Magazine", announcing the World Space Week 2017.

World Space Week 2017 is being launched today with thousands
of events planned across the globe from October 4-10. 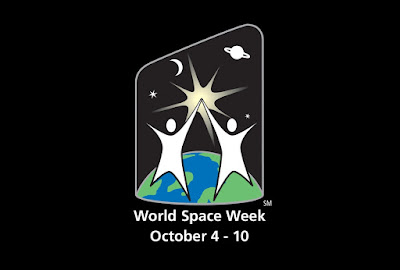 Over 86 countries are ushering in World Space Week 2017 today with a huge array of events planned to mark the occasion. Thousands are expected to get involved in the celebrations, making World Space Week the largest public space event on earth.

World Space Week was established by the United Nations in 1999 to celebrate ‘the contributions of space science and technology to the betterment of the human condition’.

This years’ theme - exploring new worlds in space - encourages participants to both celebrate the past and look to the future of space exploration by engaging in experiments and exhibitions held around the world.

From NASA’s New Horizons mission to Cassini, institutions will be exhibiting the best of space exploration to engage and spark the imagination of adults and children alike.

Organisers hope that this year’s events will open up avenues to further improve human knowledge and awareness of the benefits of space technology and its applications.

To get involved, search the World Space Week database for events planned near you.