It follows one communicates published in english on the day (13/07) in the website "livescience.com" announcing that a study carried out by Brazilian and North American scientists shows that a storm knocked down half a billion trees in the Amazon region in 2005.
Duda Falcão
Environment 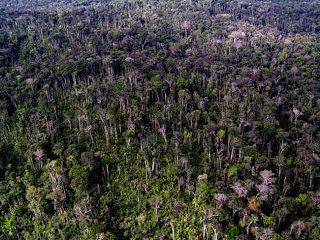 Trunks of living trees can be seen two years after a

tearing open the ordinarily closed, green canopy of this

A violent storm ripped through the Amazon forest in 2005 and single-handedly killed half a billion trees, a new study reveals.
The study is the first to produce an actual tree body count after an Amazon storm.
An estimated 441 million to 663 million trees were destroyed across the whole Amazon basin during the 2005 storm, a much greater number than previously suspected.
In some areas of the forest, up to 80 percent of the trees were killed by the storm. A severe drought was previously blamed for the region's tree loss in 2005. 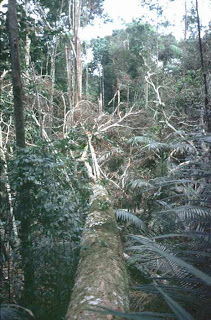 A downed tree stretches across the Amazon Forest floor in an area near Manaus, Brazil, where many

trees were felled by a powerful 2005 storm. Credit: Jeffrey Chambers
"We can't attribute [the increased] mortality to just drought in certain parts of the basin — we have solid evidence that there was a strong storm that killed a lot of trees over a large part of the Amazon," said forest ecologist and study researcher Jeffrey Chambers of Tulane University in New Orleans, La.
From Jan. 16 to Jan. 18, 2005, a squall line — a long line of severe thunderstorms — 620 miles (1,000 kilometers) long and 124 miles (200 km) wide crossed the whole Amazon basin. The storm's strong winds, with speeds of up to 90 mph (145 kph), uprooted or snapped trees in half.
When trees die, they release their stored carbon into the atmosphere, which contributes to climate change. In a vicious cycle, these storms could become more frequent in the future due to climate change.
To calculate the number of trees killed by the storm, the researchers used satellite images, field studies and computer models. They looked for patches of wind-toppled trees, which allowed them to distinguish from trees killed by the drought.
"If a tree dies from a drought, it generally dies standing. It looks very different from trees that die snapped by a storm," Chambers said.
The storm wiped out between 300,000 and 500,000 trees in the area of Manaus, Brazil, alone. The number of trees killed by the 2005 storm was equal to 30 percent of the total human-caused deforestation in that same year for the Manaus region. The researchers used the tree loss in Manaus to estimate the tree loss across the entire Amazon basin.
"It's very important that when we collect data in the field we do forensics on tree mortality," Chambers said. "Under a changing climate, some forecasts say that storms will increase in intensity. If we start seeing increases in tree mortality, we need to be able to say what's killing the trees.”
The study, funded by NASA and Tulane University, will be detailed in a future edition of the journal Geophysical Research Letters.